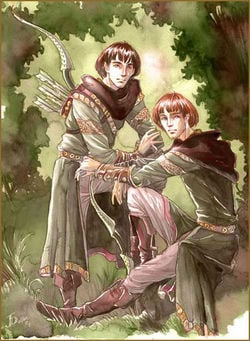 "Amrod and Amras, sons of Feanor" by Jenny Dolfen

Famous Twins had a significant role in the history of Arda, both in Elven, Half-elven, and Mannish lines.

In Quenya, the term was ónoni (sing. onóna "twin born", "one of a pair of twins"). The Sindarin cognate is gwanûr.[1]

Twins run through the female's genes. That means if the father had ancestors that were twins, but the female does not, the chances of having twins is very slim. However, if their daughter has children her father's genes affect her chance of having twins.

Twins seem to be more common among Elves, unlike the Mannish standard of one in sixty. Most of the Elven twins come from the immediate descendants of Dior.