Riener, also known as Quentandil, was a Noldorin scribe of the Elder Days. He joined the Exile of the Noldor and came back to Aman in the Second Age with some of his literary works. In Eldamar he resumed his work as scribe and author until he sailed East, never coming back. 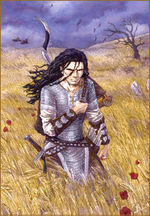 He did not return to Valinor once the War of Wrath ended, as he was too attached to Middle-earth, but it is unknown what he did during the first millennium. Probably he served at Galadriel's court at some point, as he embarked to the West by petition of her. Given the contents of a preserved letter, this should have happened between S.A. 1350 and 1600: she was worried about Annatar and sent Riener to ask the Valar if this master smith was actually a messenger from them. However, he stopped in Númenor, which made him fail in his mission, as he became amazed by the isle and tarried there (we can deduce he was afraid of not being allowed to come back if he reached Valinor). At an unknown date, Glorfindel encountered him in Eldalondë while traveling to Middle-earth and confirmed Galadriel's suspicions about Annatar. Then Riener gave him a letter for Galadriel, but it was too late.[3]

Riener lived in Hyarastorni for several centuries as a teacher, until his stay on the island put in danger many friends, counted among the Faithful.[4] As he had to escape in a rush, he could not take many books with him and he barely saved anything he had written in the island.

Due his delay in Númenor without authorization, he had to wait in Tol Eressëa for a whole age, until the end of the Third. He settled in a cabin near Kôr, where he had time to read and put his writings in order. After finding the Golden Book and various manuscripts of the Quenta Silmarillion, he realized that with the pass of time the different versions had changed or omitted information. Then he decided to create his own edition, in which he would compile as much information as possible from all the sources, giving it coherence and expanding it with some details of his own knowledge. It took him a long time to get the necessary manuscripts, millennia in some case, as he was confined in Tol Eressëa, so when he was able to return to Eldamar, his edition was still in process.[5] 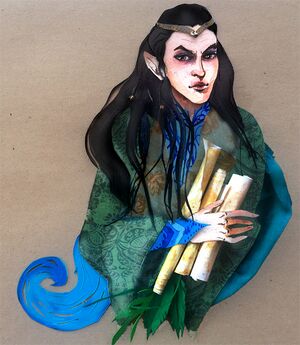 In Valinor he built his home in a retired cave, next to the Shadowmere. But he also used to live long periods in Tirion, again under the service of Finrod, and he loved travelling through the woods and borders of Aman. As a result of these trips and his bibliographical research, he wrote Description of Aman.[6]

He witnessed the Erunostalë festivities, and he was so impressed that he soon wrote a summary of those sacred months, making a research about the actions of the Valar. Two years later, he was called by Finrod to be one of the official scribes in the debates on the Nativity of Eru. Riener helped writing down everything that was said there and gave it shape in the Istimon Artaquetta, his final work.[7]

Since the announcement made in the Erunostalë, he showed great joy and was very active, but his longing for the East grew, and he frequently visited the shores of Eldamar. In the year 15 of the Seventh Age, he commissioned the construction of a ship for himself.[8] As soon as it was completed two years later, he told his few friends that he was travelling to Middle-earth again, giving no explanation. His intention surprised many and some denounced him to the Valar. However, Riener leaved discreetly, and was not seen again in Aman save in Mandos some decades later.[9]

The name Lórenotso is only known through personal testimonies. When Riener was still a child (in Elvish terms), he announced he had had a recurring dream seven times, so he was choosing this personal name. From this we can deduce Lórenotso can be translated as "Seven Dreams", from lórë ("dream") + otso ("seven").

All the names of Riener were Quenya, but some scribes included a Sindarin name in copies of his works: Findegil. It is unclear the origin of this name, but Araglas of the Tree believes it could mean "Finrod's pen": Fin(rod) + tegil ("pen").[11] 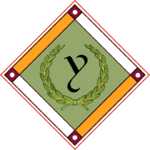 His personal emblem is based on Finrod's, his lord: that's why it keeps the green background even though the heraldic rules do not allow to put an element on a background of the same color. The laurel crown comes from his father-name Riener. The tengwa rómen is clearly from the first letter of the name, but we can also deduce two more details: his love for the letters and his attraction for the East, to which his destiny was linked since his childhood.[12]