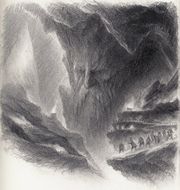 Also in that time, Morgoth's Orcs, now leaderless and reckless, but still numerous, armed and cruel, returned to the East and started harassing the Dwarven lands again, as well as the more numerous Men who settled between the Grey Mountains and Mirkwood; those early Northmen were related to the former House of Hador far in Beleriand. Once more, the Dwarves provided the Men with metal weapons and defensive measures in exchange for their skill in taming and riding horses, enabling them to function as mounted scouts and archers. Thus an Alliance of Dwarves and Men was formed, resulting in mutual respect and also warm friendship. During this period the Longbeards adopted the speech of Men, keeping their own language to themselves.[3]

Historically, the term "Longbeards" is the supposed original name of the Lombards, but other than the name, there are no other significant similarities between the Lombards and Durin's Folk.