Aldburg was a fortified town in Rohan on a green hill at the feet of the White Mountains[1] in the region known as the Folde.[2] It used to be the first capital of the kingdom Rohan and later became the base of the Third Marshal of the Riddermark and the base for the Muster of the East-mark.[2]

Aldburg was built by Eorl after Rohan had been granted to the Rohirrim by Steward Cirion of Gondor.[1] After Brego, son of Eorl, moved the capital to Edoras, the lordship of Aldburg passed on to his third son, Eofor, from whom Éomund, the father of Éomer, claimed descent.[2]

At the time of the War of the Ring, it was the home of King Théoden's nephew Éomer, who was Third Marshal of the Riddermark.[2] 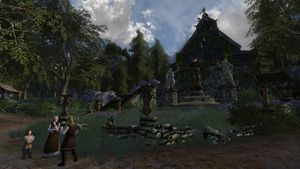 Aldburg in The Lord of the Rings Online

Aldburg is the capital town of the Eastfold, ruled by Eomer in time of peace. After Eomer departs to war, the defence of Aldburg falls to his steward Arcil, who is often in disagreement with Eomer's cousin Éothain. Because Edoras is evacuated early in the story and all its inhabitants move to Dunharrow, Aldburg and not Edoras is the in-game "capital settlement" of the West Rohan region, serving as the hub for swift travel and player activities.