Guards of the Citadel 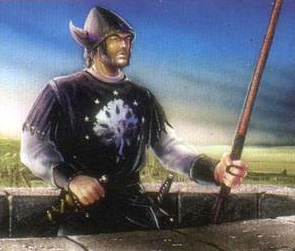 The Guards of the Citadel or Tower of Gondor were those honoured guards of Minas Tirith who were charged with protecting the Citadel, the highest and most important tier of the city, and participated in official functions.[1] When on duty they were not permitted to leave their post for any cause, save at the command of their lord.[2]

They also guarded the White Tree that stood in the Court of the Fountain. At the time of the War of the Ring it had been dead for nearly 150 years,[3] until the new King Elessar and Gandalf found a new seedling of the Tree,[4] and the Guards' great duty was refounded.

At the end of the Third Age, they were the only soldiers of Gondor entitled to wear the Livery of Elendil himself - a white tree in blossom, surmounted by a silver crown and stars, all embroidered on a field of black. They also bore heirlooms of Gondor's ancient wealth, tall helmets wrought out of mithril, with close-fitting cheek-guards and bearing the carved wings of sea-birds.[1] On 10 March T.A. 3019[5] Peregrin Took was arrayed as a Guard of the Citadel, at the command of the Steward Denethor. His appearance in this uniform gave strength to the rumour that he was indeed Ernil i Pheriannath, the Prince of the Halflings.[2]

There were at least three companies, each of which had its own storehouse; Beregond, son of Baranor belonged to the Third Company.[1] The Captain-general of the Guards was probably the heir of the throne; during the time of the Ruling Stewards it was the heir of the Steward.