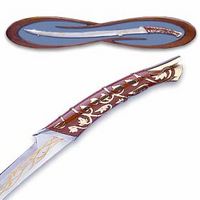 Hadhafang as designed by The Noble Collection

Hadhafang is a sword used by Elrond and Arwen in The Lord of the Rings: The Fellowship of the Ring, and also by Elrond in The Hobbit: An Unexpected Journey and The Hobbit: The Battle of the Five Armies. The sword and its history are not part of the original story, but were invented for the movies.

According to The Fellowship of the Ring movie's official publicity material, Hadhafang once belonged to the Elven lady Idril, who wed Tuor, a Man, and bore Eärendil, the father of Elrond.

Elrond wielded Hadhafang at the end of the Second Age, during the War of the Last Alliance.

Later, his daughter Arwen carried Hadhafang when she aided Frodo in his escape from the Ringwraiths. Inscribed on the blade are tengwar in (Neo-)Sindarin that say:

Aen estar Hadhafang i chathol hen, thand arod dan i thang an i arwen
("This blade is called Hadhafang, a noble defence against the enemy throng for a noble maiden")

The names have not been used by Tolkien in his stories, while Sangahyando was eventually used as a person's name, of a corsair of Umbar.