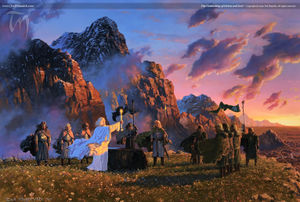 The Oathtaking of Cirion and Eorl by Ted Nasmith

The Oath of Eorl, also called the Oath of Cirion,[1] was the alliance sworn between the nations of Rohan and Gondor.

Also agreed was whenever help was needed, the two kingdoms would aid each other. The signal that help was needed was the Red Arrow, a symbol of danger. For faster communication between the two allies, the warning beacons of Gondor were used. These beacons were placed on seven hills along the northern ridge of the White Mountains.

The Oath was first sworn in T.A. 2510 by Cirion, the twelfth Ruling Steward of Gondor, and by Eorl, King of the Éothéod (later first King of Rohan) following the Battle of the Field of Celebrant. The Oath stated that the province of Calenardhon would be forever of Rohan, established its borders, and an alliance between the kingdoms. The two rulers swore their oaths on the Halifirien hill at the site of the Tomb of Elendil.

Eorl spoke his oath in Rohanese:

Hear now all peoples who bow not to the Shadow in the East, by the gift of the Lord of Mundberg we will come to dwell in the land that he names Calenardhon, and therefore I vow in my own name and on behalf of the Éothéod of the North that between us and the Great People of the West there shall be friendship for ever: their enemies shall be our enemies, their need shall be our need, and whatsoever evil, or threat, or assault may come upon them we will aid them to the utmost end of our strength. This vow shall descend to my heirs, all such as may come after me in our new land, and let them keep it in faith unbroken, lest the Shadow fall upon them and they become accursed.
—Eorl

In addition to his oath, Cirion spoke an invocation in Quenya and the Common Speech, calling the Valar and Eru to witness the oaths that were taken.

Which in Westron translates to "This oath shall stand in memory of the glory of the Land of the Star, and of the faith of Elendil the Faithful, in the keeping of those who sit upon the thrones of the West and of the One who is above all thrones for ever."

Eru's name was very rarely invoked in oaths, and indeed had not been since the time of the Last Alliance. Among people of Númenórean descent, it was held that only the King could call upon Eru, but Cirion had that authority as Steward and regent for the King.[2]

In T.A. 2710, King Déor asked the help of Steward Egalmoth to drive off the Dunlendings from the occupied Ring of Isengard, but the Steward was unable to send help[3] (possibly because of a renewed war against the Orcs of Mordor[4]).

During the rule of Beren, both nations where overwhelmed; Gondor by the Corsairs of Umbar and Rohan by the Dunlendings, and couldn't help each other. After the Long Winter however, as the Rohirrim started to repel the invaders, Gondor afforded sending help from both west and east of the White Mountains to assist them.[5][6] 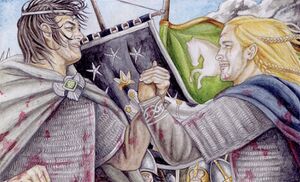 And they clasped hand in hand by Peter Xavier Price

Gondor sent great help to King Folcwine who reconquered the west-march from the Dunlendings. In T.A. 2885, when Ithilien was invaded in great strength, Folcwine sent many men, led by his twin prince sons, to Gondor. With their aid Steward Túrin II won a victory at the Crossings of Poros, though the princes Fastred and Folcred were slain.[7]

During the War of the Ring, the Red Arrow was brought to King Théoden of Rohan by a messenger of Gondor while Minas Tirith was besieged by Sauron, and Théoden rode out with the Muster of Rohan to the Battle of the Pelennor Fields.

The Oath was renewed by Aragorn and Éomer upon their accessions to the thrones of Gondor and Rohan.