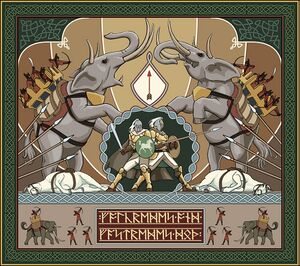 The Crossings of Poros[1], also known as the Crossing of Poros or Fords of Poros, marked the point where the Harad Road passed over the river Poros from South Gondor and into Gondor proper (specifically South Ithilien).

The Fords first entered history in the year T.A. 1944, when the enemies of Gondor made an alliance. They attacked simultaneously from the northeast and from the south. It was left to the great general Eärnil (later King Eärnil II) to deal with the army of Harad approaching from the south. Rather than defend the Fords (as no doubt the Haradrim expected he would), Eärnil positioned his army some forty miles further north, in South Ithilien, and decimated the encroaching enemy.

Though Gondor survived that assault with great loss, the land was often threatened by the Haradrim. In T.A. 2885, the fierce people of that southern land occupied South Gondor and attacked Ithilien across the Poros. Steward Túrin II was aided in his defence by King Folcwine of Rohan, whose twin sons Folcred and Fastred rode with his army. These two northern armies forced the Haradrim back across the Fords and had the victory, but the sons of Folcwine both fell in that battle.

The Rohirrim buried the twins in a great mound, after their custom, and that mound, the Haudh in Gwanûr, guarded Gondor's southern boundaries for long years after.

A tapestry depicting Folcred and Fastred's last stand is found in Meduseld and can be acquired for use in player's houses.