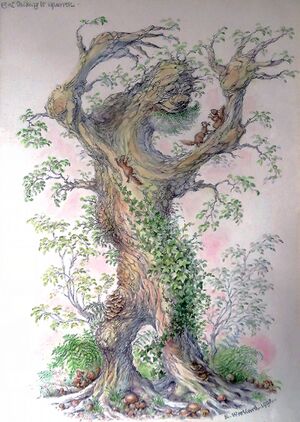 Númenor in the Second Age had many squirrels in its woods, mostly red. Like all the animals in the isle, they were friendly and easy to tame. Númenórean women were fond of them, and sometimes squirrels lived nearby the houses to visit them.[1]

In Mirkwood, the squirrels were black in colour.[2] During their journey through Mirkwood, Thorin and his company killed a black squirrel for food, but found it to be inedible.[3]

Nature of the black squirrels[edit]

John D. Rateliff has suggested that the black squirrels are "dark in coloration" (like the other animals the company meet in Mirkwood), "no doubt from protective camouflage in a dimly lit environment".[4] Henry Gee, discussing the topic of melanism in Middle-earth, accepts the complexity of the subject (as black creatures often can be said to having been created or used by Morgoth and Sauron), but concludes that dark creatures per se are not "evil" in the works of Tolkien: "black creatures, whether swans, butterflies or squirrels, are remarkable only inasmuch as there are light-colored forms with which they can be contrasted."[5]

Black squirrels are described and given role-playing statistics. The creature is portrayed as an ally of the Wood-elves and the Woodmen.[6]

Black squirrels are described and given statistics in the RPG magazine The Hall of Fire (intended for use with Decipher's The Lord of the Rings Roleplaying Game). Black squirrels are conceived as having been created by the 'dark magics' of, and act as spy for, the Necromancer.[7]

Squirrels are found throughout Middle-earth. Lore-masters can also have a non-combat squirrel pet.