The Walt Disney Company, also known simply as Disney, is an American media and entertainment conglomerate, founded in 1923 by brothers Walt Disney and Roy Disney.

Throughout his life, J.R.R. Tolkien had a deep concern and strong opinions about adaptations of his legendarium. For Tolkien, the products of the Disney company were an especially prominent example of bad style.

In 1946, he rejected suggestions for illustrations by Horus Engels for the German edition of the Hobbit as "too Disnified",

Bilbo with a dribbling nose, and Gandalf as a figure of vulgar fun rather than the Odinic wanderer that I think of.
—Letter 107

Moreover, when certain producers became interested in movie adaptations of Tolkien's works, (he had sold the film, stage and merchandise rights of The Hobbit and The Lord of the Rings to United Artists in 1968), he forbade Disney should ever be involved:

It might be advisable [...] to let the Americans do what seems good to them — as long as it was possible [...] to veto anything from or influenced by the Disney studios (for all whose works I have a heartfelt loathing).
—Letter 13

In another letter, Tolkien writes in 1965 that neither he nor his publishers (George Allen and Unwin) intend to give Walt Disney permission to make a film of his books.[1]

A remarkable critique of Walt Disney was given by Tolkien in a 1964 letter to a fan:

I recognize [Walt Disney's] talent, but it has always seemed to me hopelessly corrupted. Though in most of the 'pictures' proceeding from his studios there are admirable or charming passages, the effect of all of them to me is disgusting. Some have given me nausea
—Letter to Miss J.L. Curry, of 15 July 1964 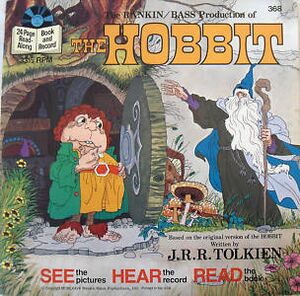 Cover of the The Hobbit Read-Along

Nevertheless, Disney's Disneyland and Buena Vista record labels were to release six audio products based on the Rankin/Bass The Hobbit and two based on Rankin/Bass The Return of the King in the 1970s and 1980s.

Moreover, Disney has released through Fox Searchlight Pictures the biographical film Tolkien (2019), which covers the early years of J.R.R. Tolkien until the World War I.