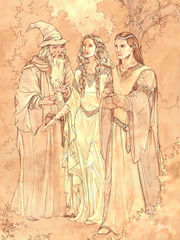 "And of all the Elven-rings Sauron most desired to possess them, for those who had them in their keeping could ward off the decays of time and postpone the weariness of the world."
― Of the Rings of Power and the Third Age

The Three Rings were magical artefacts, three of the Rings of Power. They were forged by Celebrimbor and his smiths with the desire of "understanding, making, and healing" and granted the power to preserve all things unstained.[1][2] They were named Vilya, Narya, and Nenya after the principal elements of air, fire, and water (respectively).

Whereas the other Rings of Power gave the power to control and conquer, and made their wearers invisible, the Three were different. Sauron did not assist in their making nor ever did he touch them, and his taint was not directly upon them.[3] But, as they were created according to the craft taught by him, they would fall under the power of the One Ring.[4]

[edit] Names and descriptions of the Three Rings

The Rings were named after the three principal elements, each matching the colour of their stones. They were originally given to the three greatest Eldar in Middle-earth at that time.[6][8] Their names also match the fates of the three Silmarils.[note 1][11][12] However, not much is known about their specific powers and whether they had anything to do with each element.[13]

After "Annatar" taught and assisted the Gwaith-i-Mirdain with creating the Rings of Power, he left Eregion. Celebrimbor proceeded then to forge Three more alone with the knowledge already gained from him. Their forging was completed by around S.A. 1590.[14] Annatar did not learn about them, and they were "unsullied", free from Sauron's corrupting influence.

When Sauron created the One Ring, the Elves who wore the Rings of Power heard his voice and realized they had been deceived and took off their rings.[4]

As the Elves failed him, Sauron waged war against Eregion in S.A. 1693. Celebrimbor immediately sent his three rings away for safekeeping:[15] he gave Nenya to Galadriel in Lothlórien, who advised him to send the other two to Lindon, away from Sauron, so he gave Vilya to High King Gil-galad and Narya to Círdan.[6]

Sauron succeeded in claiming the Rings of Power. But the Three remained outside his grasp and their whereabouts were seldom revealed.

After Sauron's defeat in the War of the Last Alliance at the end of the Second Age, the Keepers of the Three Rings were free to wear them. During the Third Age, the Rings were not idle.[16] They were used to create enclaves of peace and protection where memory and beauty were preserved from wear and decay.[4][3]

During the War of the Ring, Frodo Baggins found out that Galadriel held Nenya, using it to preserve Lothlórien from withering, and Aragorn reprimanded him for revealing this. The other two rings were revealed at the end of the Third Age, after Frodo destroyed the One Ring, and the Dark Lord Sauron was completely overthrown. It transpired that Elrond had wielded Vilya and presumably used its powers to keep Rivendell a haven safe from attack. It was Gandalf who wielded Narya, given to him by Círdan.[17]

After the destruction of the One Ring, their power diminished and became plain relics. Not being able to hold back Time and preserve the High-elven lore and beauty, their bearers, in the Last Riding of the Keepers, left Middle-earth on the White Ship.[1][18] The Third Age ended and the Dominion of Men began.

In the introduction of the movie, the Three Rings are said to be made "for the tall Elf Kings" as three unidentified silhouettes are seen holding and lifting the Rings.

In the prologue to the first film, the Three Rings are show briefly being borne by Galadriel, Gil-galad and Círdan; later in the film Galadriel reveals to Frodo that she possesses Nenya. In the final film, although Gandalf can be seen wearing Narya its significance is never stated.

In the Extended Edition of the film, we see Narya on Gandalf's finger as an Orc attempts to cut off his hand in an attempt to claim it for Sauron. However, Galadriel arrives to rescue Gandalf and vanquishes the Orc in the nick of time. She can be seen wielding Nenya on her finger throughout the scene. During the subsequent battle against the Nazgûl, Vilya can be glimpsed on Elrond's finger.