Belladonna was one of the three remarkable daughters of the Old Took.[1] She had eight older brothers (and one younger), and was the eldest of the three daughters.[2] Belladonna married Bungo Baggins, who built a spacious hole for her (partly with her money).[1] It became the residence of the Baggins Family, and in 2890, her son and only child Bilbo was born. She died in 2934,[2] eight years after her husband.[3]

belladonna is the name of a poisonous plant,[4] fitting in with the Hobbit-habit of naming girls after flowers.[5]

The word is understood as an Italian name, a rarity among Hobbits, and translates as "beautiful lady" although it derives from Latin bladone "nightshade".

The name participates in a circular wordplay with the names of her sisters, Mirabella and Donnamira, also Italian names.

In her first appearance in the fiction, Belladonna - which has stayed unchanged from the earliest survived sketch of the story[6] - is described as "one of three remarkable daughters of the Old Took". Humphrey Carpenter, in his attempt to draw an analogy between Bilbo and Tolkien, noted that Tolkien's mother, Mabel Suffield, was one of three remarkable daughters of John Suffield, who lived to be nearly a hundred.[7]

A portrait of Belladonna, Bungo and a young Bilbo hangs at Bag End. As he looks at it, Bilbo exclaims "A Hobbit couldn't ask for finer parents".[9] 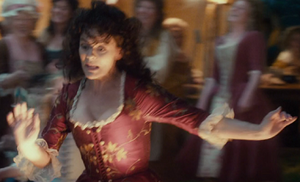 Belladonna in The Hobbit: An Unexpected Journey

Belladonna appears briefly in the prologue of the film's Extended Edition, collecting a young Bilbo as he goes up to Gandalf as the Wizard is setting off fireworks during a Midsummer's eve celebration. She is played by Sonia Forbes-Adam.

The same portrait from The Lord of the Rings: The Fellowship of the Ring appears at the end of the film, also based on Fran Walsh's appearance.[10]