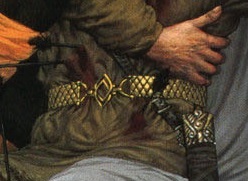 Boromir's belt was gifted to Boromir by Galadriel. It appeared as it were of linked golden leaves.

Before the Company of the Ring left Lothlórien, each of its members was presented with a gift by Galadriel. Boromir was given a belt of gold which he carried in the journey until the Breaking of the Fellowship.[1]

When Aragorn, Gimli and Legolas laid him in his burial boat, the golden belt gleamed about his waist.[2]

Later on, Faramir one night saw the boat by Anduin and Boromir lay there dead, and the belt was the only thing he did not recognize. Frodo said to Faramir that the belt was given to him in Lórien, and thus positively identified the dead man as Boromir.[3] 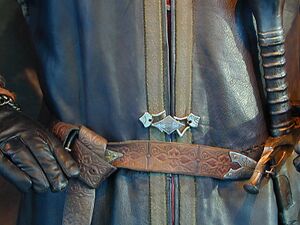 In The Fellowship of the Ring (2001), Boromir is the only member of the Fellowship who does not receive a gift from Galadriel. He does wear a belt throughout the film, but it is made of leather, not gold. It is possible Peter Jackson wished to convey the mistrust that Galadriel and the rest of the group felt toward him.[4]