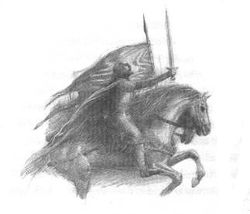 The Lords of Dor-lómin ruled Dor-lómin, a realm of the Edain in northern Beleriand.