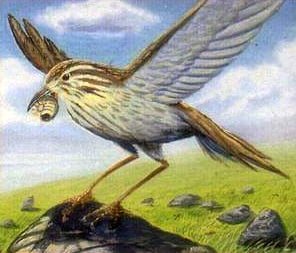 The Old Thrush by Mark Poole

Thrushes are large speckled brown birds with a special fondness for snails, whose shells they remove by breaking them against stones. The thrush that Bilbo Baggins and the Dwarves encountered on the Lonely Mountain was unusually large and nearly black with dark spots on its pale yellow breast.[1] Thorin stated that it was a member of an ancient breed, long lived and magical.[2]

In T.A. 2941[3] the thrush on the Lonely Mountain was instrumental in the downfall of Smaug. On Thrór's Map, the Moon-letters instructions said to "Stand by the grey stone when the thrush knocks" on Durin's Day to see the magic key-hole.[4] Sure enough, when Durin's Day arrived this thrush knocked a snail on the grey stone in the small rocky alcove on the Mountain, which alerted the company to watch for the appearance of the keyhole and secret door.[1]

The men of Lake-town and Dale could understand the language of the thrushes, and some thrushes could understand the common tongue. Fortunately the thrush on the Mountain was one of them for he was able to understand Bilbo's account of his talk with Smaug and hear about the bare patch on the dragon's breast.[2] On the night when Smaug attacked Esgaroth the thrush spoke to Bard and revealed the vulnerable part on the monster. Bard was able to pierce the dragon with his arrow with this knowledge.[5]

After the Dwarves and the Hobbit had escaped from the mountain to Ravenhill the thrush returned with the news of Smaug's demise. Finding that none could understand his speech, the thrush left and brought back the raven Roäc who could translate the thrush's words.[6] After this exchange of information the thrush vanished from the scene.

In The Legend of Sigurd and Gudrún, a raven and a finch speak two of the verses,[7] reminiscent of the sentient thrushes and ravens in The Hobbit.

On the earliest version of Thrór's Map (called "Fimbulfambi's Map" by John D. Rateliff in The History of The Hobbit since that was Thrór's original designation) the Moon-letters said to "Stand by the grey stone when the crow knocks…". This was soon changed to thrush.[8]

When the thrush informs Bard of Smaug's weakness, its speech is translated in English with a warbling voice.

Once again, the thrush's speech is translated into English when he speaks to Bard.

Given gaming statistics, the Thrushes are among Radagast's principal agents and are friends of the Northmen. The thrush language, which can be learned by Elves and Men but not by Dwarves, is called "Throsel-tunge".[9][10]

The Thrush goes with Bilbo into The Mountain. The Thrush later tells Bard of the dragon's weakness.

Towards the end of An Unexpected Journey, a thrush appears to the Dwarves and it is considered as a sign of hope. The bird flies to the Lonely Mountain and breaks an nut, which wakes Smaug. The same thrush, or another of its species, appears during The Desolation of Smaug where it knocks snails against the gray stone. However, the Thrush does not fly to Lake-town to inform Bard of Smaug's weakness like in the book, nor is Bard's family's ability to understand the Thrush's language ever addressed.