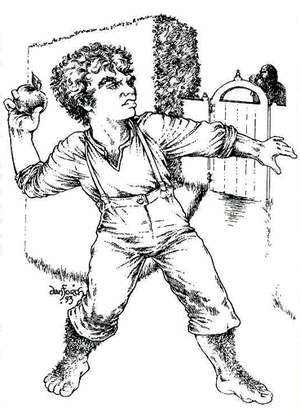 Sam throws an apple at Bill Ferny by Liz Danforth

"I hope I never smell the smell of apples again! My tub was full of it. To smell apples everlastingly when you can scarcely move and are cold and sick with hunger is maddening. I could eat anything in the wide world now, for hours on end - but not an apple!"
― Fíli[1]

Apples were the fruits of apple trees cultivated in the Shire and in Bree-land. Bilbo Baggins served apple-tart to Bifur at the Unexpected Party.[2] Before Frodo left the Shire he noticed how fine the weather had been, such that "the trees were laden with apples".[3] When Strider led the hobbits from Bree, Sam Gamgee chewed on one of the apples given to him by Nob and Bob at the Prancing Pony. Apples were so much a part of the diet of Hobbits that Sam recited a proverb: "Apples for walking, and a pipe for sitting." As the party passed the house of the scornful Bill Ferny, Sam chucked an apple at him and struck Bill square on the nose.[4]

Apple trees are not directly mentioned in The Lord of the Rings but one of the men of Bree was Rowlie Appledore, whose last name was an old English word for "apple tree".[5]

The Sindarin translation of the name Pippin is Cordof.[6] As pippin is a kind of apple, it has been suggested that cordof refers to a "small red apple".[7]

In the movie Sam does not eat any apples and he does not throw one at Bill Ferny. However, in Scene 16, "The Nazgûl", when the hobbits start to prepare a breakfast Strider tells them, "Gentlemen, we do not stop until nightfall." Startled, Pippin asks, "What about second breakfast?" Strider says nothing and walks on. Soon though he tosses an apple from behind a bush, which Merry catches. A second tossed apple smacks Pippin in the forehead.