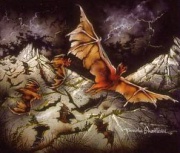 Bats were flying creatures of the night that tended to roost in caves or dark forests.

In the First Age Thuringwethil was Sauron's messenger and took the form of a giant bat with great fingered wings. Lúthien would take her form when she and Beren journeyed to Thangorodrim.[1]

Bats were apparently quite common in the northern parts of Middle-earth. When Bilbo Baggins was walking alone in the tunnels of the Misty Mountains he heard the whirr of bats by his ears so often that it ceased to startle him.[2] As Bilbo and the dwarves marched through Mirkwood they gave up lighting fires at night because they attracted thousands of moths, followed by huge black bats.[3] Bilbo encountered yet another bat in Smaug's lair after the dragon had gone away. This creature, brushing Bilbo's face, caused the hobbit to stumble and his torch to go out (which brought the dwarves to his rescue with more torches).[4] Bats were most famous in Middle-earth for taking the part of the Goblins during the Battle of Five Armies, in which they flew together over the battlefield so densely that no light could be seen between their wings.[5]

In Gnomish, one of Tolkien's early conceptions of an Elven language, the word for "bat (animal)" is cwildred.[6]

In the story Roverandom, the shadowbats are mentioned among the creatures living on the moon.[7]

Bats are found in caves throughout Middle-earth, especially in Moria. They are frequently the pets of the Merrevail.

Bats can sometimes be seen flying out of caves when Talion enters or exits them.

Bats in The Hobbit: The Battle of the Five Armies

Thousands of bats, accompanying a second Orc army, are sent from Gundabad to the Lonely Mountain for the Battle of the Five Armies.