"Proud were the head that bore this helm, which the sires of Húrin bore."
― Thingol, in Narn i Hîn Húrin

The Dragon-helm of Dor-lómin, also known as the Helm of Hador, was the heirloom of the House of Hador that was worn by Túrin.[2]

The Dragon-helm was crafted for a Dwarf, by a Dwarf, and was too large and heavy for an Elf. Even Men found the Helm was too massive, and only Hador and some of his descendants had the strength to wear it. The Helm of Hador was a grey steel helm with a visor that was made in the fashion of Dwarves so as to shield the eyes of the wearer. The helm was embossed and embellished with gold and graven runes of victory, and bore defiantly upon its crest a gilded image of Glaurung. It was said that a power lay upon the runes that protected its wearer from wounds and struck fear into the hearts of enemies, turning back swords and darts.[3]

The Dragon-helm was forged some time after the Dagor Aglareb (F.A. 260) by the dwarf-smith of Nogrod, Telchar, for his lord Azaghâl, who then gave it as a gift to Maedhros. He in turn passed it on to his cousin Fingon. In 416, Fingolfin, the High King of the Noldor, created the fiefdom of Dor-lómin and made Hador the first Lord of Dor-lómin. To celebrate the event, Fingon presented Hador with the helm, which would then become a heirloom of his House.[3]

He and his son Galdor wore it often in combat, and their troops gained morale when they saw the massive crest towering over the other helms in battle. Unfortunately, Galdor did not wear the Helm when a host of orcs assaulted Eithel Sirion, and was slain by an arrow. His son Húrin kept the Helm but seldom wore it, being of shorter stature and greater pride. After his capture by Morgoth, his wife Morwen kept the Helm, and sent it to Doriath for Thingol. The king handled it with solemnity, and presented it to Túrin.[3]

When Túrin grew up, he requested the Helm among other arms to fight Morgoth's armies in Dimbar and the north-marches of Doriath. Thus in Beleriand it was known that the Dragon-helm was seen again, and many thought that Húrin had came back from hell.[4] 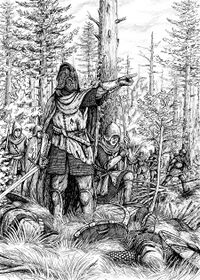 The Helm was left in Doriath when Túrin fled it, but Beleg took it with him on his quest to find his friend. He delivered it when they met on Amon Rûdh.[5] Túrin was monstrous in war and took one of his many titles from it: Gorthol, the "Dread Helm". The two captains were known as "the Bow and the Helm" after their gear, which also give name to Dor-Cúarthol, the land they protected.[6]

It is said that after the Sack of Bar-en-Danwedh, Túrin brought the Helm with him to Nargothrond, although he did not wear it, and later to Brethil.[7][8] After his death, the Men of Brethil somehow recovered it and the new Lord of Brethil handed it to Húrin.[9] 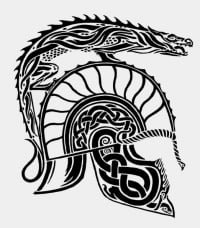 The Dragon Helm of Dor-lómin by Alan Lee

The Dragon-helm first makes an appearance in the first version of The Lay of the Children of Húrin, in which it was a heirloom that was often worn by Húrin in battles, and magically protected him.[10] In the second version of the poem, it is referred to as the helm of Húrin and is described as being made of grey-gleaming steel with gold as well as runes of "might and victory".[1]

The destiny of the Dragon-helm after the Sack of Bar-en-Danwedh is not addressed in the Narn i Hîn Húrin (and consequently neither is in The Children of Húrin) or the published Silmarillion, but in some revisions of the text, Tolkien intended to extend the history of the Helm into the period of Túrin in Nargothrond and beyond. An isolated scrap of writings says that somehow Túrin had brought the Helm to Nargothrond, but he refused to wear it until the Battle of Tumhalad. There the Helm protected Túrin from Glaurung's enchantment, but Glaurung wanted to remove Túrin's protection. He tried to falsely claim that Túrin was his vassal since he bore the dragon's likeness on his helm. It was only when Glaurung's deception failed that he moved to taunt Túrin, which made made him thrust up the visor to look at the dragon directly in his eyes. There is also another note explaining that Morwen knew that the Mormegil was her son after hearing that the Dragon-helm had been present in the battle. There is also a suggestion of Túrin wearing the Helm when he slew Glaurung.[7]

In the Grey Annals there are many later additions weaving the Dragon-helm into the story similarly as described above.[8] Christopher Tolkien did not include this fragmentary development in his edition of The Silmarillion, as his father never gave details on how the Helm was taken from a place to another or how the Haladin recovered it. Instead, Christopher used one of the many versions, in which Túrin wears a dwarf-mask found within the armories of Nargothrond.[11]