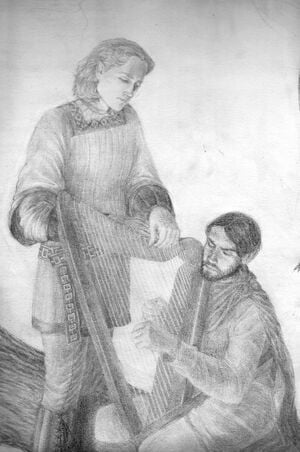 Finrod and Beor by Svirina Vera

"...when we name you "Children of Eru" we do not speak lightly; [...] and we proclaim that ye are our kin, in a kinship far closer (both of hröa and fëa) than that which binds together all other creatures of Arda, and ourselves to them."
― Finrod in the Athrabeth Finrod ah Andreth

The Children of Ilúvatar, also Híni Ilúvataro or Eruhíni,[1][2] are the two races of Elves and Men. Their existence, along with the Universe in which they were to live, was conceived in the Music of the Ainur, but the Ainur had no part in their making. Ilúvatar alone brought them into being, and they had fëar (spirits) of the same type as the Ainur, though far less powerful.

Unlike the Ainur, however, the Children were intended to exist as a union of flesh and spirit; their bodies, or hröar, are as integral to their being as their fëar. As such, they are also called Incarnates.

While their status as embodied souls created by Ilùvatar makes them extraordinarily alike, each Kindred of the Children was also bestowed with different gifts from their maker. The Elves received great beauty, near immortality, skill with arts and crafts, and keen memories. Men, on the other hand, were given freedom to act outside the boundaries set by the Music of the Ainur, eventual supremacy over Middle-earth, and mortality.[3]

Elves were the first of the Children of Ilúvatar to appear in Middle-earth; Men were not to follow until the rising of the Sun and the beginning of the First Age, many thousands of years later. Both Kindreds awoke in the far east of Middle-earth: the Elves at Cuiviénen and Men in Hildórien.

The Dwarves, while also incarnates, are not typically called Children of Ilúvatar, for though they were given sapience and independent being by Ilúvatar, they were in fact created by Aulë. When Eru gave blessing to Aulë's work, he distinguished the Dwarves from Elves and Men by calling them "the children of my adoption" while referring to Elves and Men as "the children of my choice."[4]

Parallels between Men and Elves[edit] 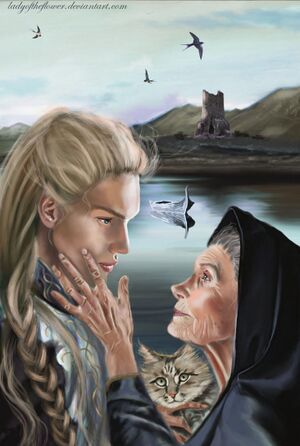 The history of Men and their races throughout the Ages, bore some similarities to that of the Elves, especially during the First Age.

Both Elves and Men originated somewhere in the East (Cuiviénen and Hildórien) and then both marched for the West (Eldar and Edain) leaving many of them behind (Avari and Men of Darkness).

They were divided mainly into three groups (Vanyar/Noldor/Teleri and House of Beor/House of Hador/House of Haleth) when they reached Beleriand.

Eventually some of them (Calaquendi and Númenóreans) passed the Great Sea and reached a western place (Valinor and Númenor). They advanced and prospered near the Light of Valinor while their kin were left behind in Middle-earth.

There, some were corrupted by the Enemy which caused a Fall (Noldolantë and Atalantë). A part of them returned to Middle-earth and founded realms (Exile of the Noldor and Realms in Exile) becoming Kings among their "lesser" kin.

Eruhíni (sing. Eruhin) is the Quenya term. It contains the name Eru, the One (a name for Ilúvatar) and hína ("child").[5]

The Sindarin cognate was Eruchîn.[6]