Kinship of the Half-elven 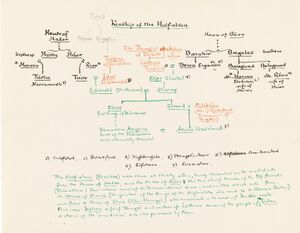 Kinship of the Half-elven refers to a manuscript by J.R.R. Tolkien, enclosed by him in a 1964 letter to Eileen Elgar (together with Concerning ... 'The Hoard').

The manuscript consists of a family tree illustrating the 'Kinship of the Half-elven' (so entitled), together with an explanatory note.

The genealogical chart was reproduced in Sotheby's English Literature and English History 6-7 December 1984 (the letter and manuscript were sold on 6 December 1984 at Sotheby's, London), and in Beyond Bree May 1985 (with further discussion and explanation of the family tree published in the June 1985 issue).[1][2][3] The letter and manuscript then appeared at auction on 16 July, 2022 and sold for $150,000 to an unknown buyer.[4]

The Half-elven (Pereldar) were thus all closely akin, being descended on the mortal side from the House of Hador, and the House of Bëor: the two chief houses of the Elf-friends (Dúnedain) from whom most of the Numenoreans came; and on the elvish side from the House of Finwe (the greatest of the Kings of the High-elves who went to the Blessed Realm) and from the House of Elwë (Elu-thingol) who remained in the west of Middle-earth. But since Melian, wife of Thingol and mother of Lúthien came of the people of the Valar a strain of the 'race divine' was also possessed by them.
—J.R.R. Tolkien, [Explanatory note][5]