The Shire-hobbits or Shire-folk were the Hobbits that lived in the Shire, as opposed to Bree-hobbits and Bucklanders. They represented the majority of the whole Hobbitish population of Middle-earth.

Shire-hobbits called everyone else "Outsiders". Due to living in the Shire, the Shire-hobbits were largely sheltered from the rest Middle-earth and did not know or pay attention to what was going on outside of the Shire.[source?] The thought of the Sea far in the west filled them with awe and curiosity and was always part of their imagination (only a very few exceptional hobbits such as Isengar Took and Basso Boffin were said to have "gone to sea"[1]) but by the end of the Third Age it turned into fear, parallel to distrust of all Elvish lore, and this mood remained even after the War of the Ring.[2][3]

The Hobbits of the Shire were considered the most rustic and pastoral of their kind. The most important family among the Shire-hobbits were the Tooks of the Westfarthing, who had held the hereditary, and largely honorary, title of Thain from T.A. 2340.

The Hobbits began keeping records only after the settlement of the Shire. The Shire-hobbits had a general interest in genealogy, and it was the only kind of history they were interested, although others were reading books and gathered news form Elves, Dwarves and Men.[2] 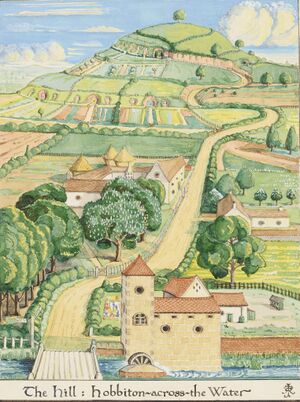 "The Hill - Hobbiton-across-the-Water" by J.R.R. Tolkien.

The Shire-hobbits kept the ancestral custom of hobbit-holes (probably began by the Harfoots), which was the case for the poorest hobbits, but also the richer who constructed luxurious versions of the former.

In the flatlands however, such as in the Marish they began to build farm-houses and barns, a craft derived from the Dúnedain, or even by the Elves who roamed Eriador, but in their own hobbit fashion. Craftsmen (millers, smiths, ropers, cartwrights) were building sheds and workshops and preferred living in houses.

The earliest houses were above-the-ground imitations of smials: bulged buildings thatched with dry grass or straw, with turfs as roof. The chief peculiarity, that persisted even later, was their preference for round windows and doors. But they evolved the craft, partially with devices learned from Dwarves. Long, low and comfortable houses, made of wood, brick and stone were built even in the hilly regions where smials could be burrowed, in important villages (Michel Delving, Hobbiton and Tuckborough).[2]

Very few Hobbits were golden-haired, but at the end of the Third Age, especially in S.R. 1420, many children of the Shire were born like this.[4] Several of the daughters of Sam Gamgee (including Elanor) were notable examples of golden hair among Hobbits.[5]

They were a great following of the brothers Marcho and Blanco. They were allowed to pass the Bridge of Stonebows and settle the lands, and in return swore nominal allegiance to the Kings of Arnor, being required only to acknowledge their lordship, speed their messengers, and keep the bridges and roads in repair.[2]

The hobbits suffered during the Great Plague but their numbers flourished until the Long Winter and the Days of Dearth. But long after them they flourished again.[2]

Three centuries after their foundation, during the final fight against Angmar at the Battle of Fornost, the Hobbits maintain that they sent a company of archers to help but this is nowhere else recorded. After the battle the kingdom of Arnor was destroyed, and in absence of the king the Hobbits elected a Thain of the Shire from among their own chieftains.[2]

The first Thain of the Shire was Bucca of the Marish, who founded the Oldbuck family. However, later on the Oldbuck family crossed the Brandywine River to create the separate land of Buckland and the family name changed to the familiar "Brandybuck". Their patriarch then became Master of Buckland. With the departure of the Oldbucks/Brandybucks, a new family was selected to have its chieftains be Thain, the Took family (Indeed, Pippin Took was son of the Thain and would later become Thain himself). The Thain was in charge of Shire-moot and Muster and the Hobbitry-in-arms, but as the Hobbits of the Shire led entirely peaceful, uneventful lives the office of Thain was seen as something more of a formality.

The Hobbits played a significant part in the War of the Ring, after the end of which the greatest families and the learned among them developed a wider interest in ancient history, started writing down many of their oral traditions and studied the ancient histories and legends of the Reunited Kingdom whose they were a part. By Fo.A. 100 there were many historical books and records formed libraries throughout the Shire. They were very interested in chronology and even drew up complicated tables showing the relations of the Shire Calendar with other systems, in the Red Book.[6][7]