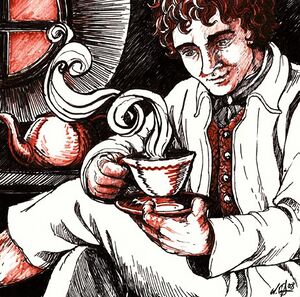 "It isn't time yet. It can't be tea-time even, leastways not in decent places where there is tea-time."
― Samwise Gamgee in The Two Towers, "Journey to the Cross-Roads"

Tea was a beverage that the Hobbits (specifically Shire-hobbits) enjoyed alone or socially.

A time of resting and relaxing, the tea-time[1] was considered a meal on its own, between lunch and dinner.[2] It was customary to offer guests for a cup of tea.[3]

Bilbo Baggins invited Gandalf for a cup of tea when he unexpectedly arrived to Bag End. After his invitation, Gandalf showed up with Thorin and Company.[4]

In a poem written by Samwise Gamgee, the Lonely Troll served Perry-the-Winkle some "fulsome tea" and the two friends regularly met in weekly tea sessions.[5]

In the early stages of the legendarium, Tolkien created two Elvish words for "tea": in Qenya tyé (clearly adapted from English),[6] and in Gnomish suithlas (literally "drink-leaf").[7]

Tea leaves can be grown by farmers, and characters with the cooking craft can produce several varieties of tea (including Black, Green, Red, and White Tea).[8] In the introductory quest "Sweet Bilberry Tea", Celandine Brandybuck asks the player to collect bilberries for her medicinal tea.[9]