The Tower of Ecthelion, also known as the White Tower or the Tower of Denethor was the chief tower of the Citadel of Minas Tirith.[1] It was a tall white tower atop Minas Tirith which contained the throne of the King of Gondor and a secret room housing a palantír. Although a tower had graced the highest point of Minas Tirith since ancient times, it was rebuilt by Steward Ecthelion I some three centuries before the War of the Ring, and so gained his name.

The Tower had "its eye upon many lands". It was because of this Tower that the city was later named Minas Tirith ("Tower of the Guard").[2] 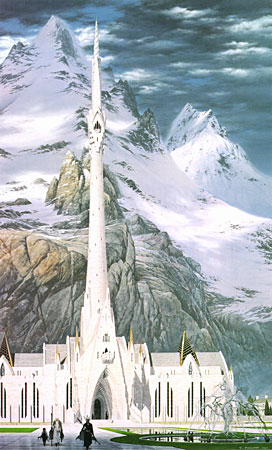 Under the sun, the Tower's shapely form shone and glimmered like a spike of crystals, pearl and silver against the sky. White banners waved from its battlements.[3]

In the Tower Hall was the throne of the King of Gondor upon a dais, and at the foot the dais on the lowest step was a black chair where the Steward of Gondor sat. The royal court must have been also there.[4]

After the fall of Sauron, on May 1, the standard of the Stewards of Gondor was raised for the last time. That day Aragorn was crowned King and when he entered the Citadel, the Livery of Elendil bearing the Tree and the Stars was unfurled on the pinnacle of the Tower of Ecthelion.[7]