(Redirected from Angle of Eriador)

The Angle in Eriador was the wedge of land between the rivers of Hoarwell and Loudwater, south of the Trollshaws.[1]

The Angle was originally part of the realm of Arnor.[2] In T.A. 861, in the division of Arnor,[3] the Angle became part of the kingdom of Rhudaur.[2]

The Stoors, a branch of the race of Hobbits, crossed the Misty Mountains westward into Eriador during the middle years of the Third Age. They were said to have emerged from the Redhorn Pass in about 1150, and from there they spread out across the wide lands, settling along their favoured riverways as far south as Tharbad and the Dunland borders. Their most noted settlement, though, was on the more northerly tongue of land - the Angle.[3]

The Stoors only remained in the Angle for some two hundred years before they moved on again, but at this point their kind divided. Some travelled west and north, and their descendants eventually merged with the other Hobbits of Bree and the Shire. Others returned across the Misty Mountains and travelled back down into the Vales of Anduin.[3]

By the later centuries, when Aragorn and the Hobbits passed by the Trollshaws, the area probably had been deserted.[4][5] 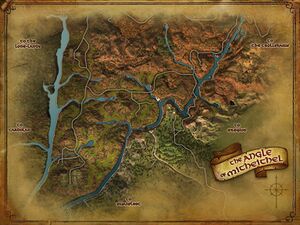 Map of the Angle from The Lord of the Rings Online.

More fully known as the "Angle of Mitheithel", this area is an extension of the Trollshaws region.[6] It is the site of the Ranger village "Tornhad", a long-abandoned Stoor village, and several ruins both from Eregion and from Rhudaur.[7]