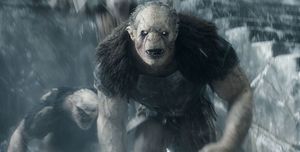 A member of Bolg's bodyguard, as seen in The Hobbit: The Battle of the Five Armies

The Bodyguard of Bolg were a group of Orcs who served as the bodyguards to the Orc Chieftain Bolg of the North, son of Azog, during the Battle of Five Armies.[1]

Upon the arrival of the Goblins to the Battle of Five Armies, as they filled the valley, with Bolg, was his bodyguard. Of 'huge size' and armed with scimitars of steel.

During the battle, Thorin Oakensheild left Erebor and entered the fray. He drove against against the Bodyguard but could not break the Goblin's ranks.[1] Later, he and the dwarves of his company were gathered in a ring as they fought and were driven against by the bodyguard.[1]

After Thorin's defeat in the battle, Beorn arrived to his aid and carried him to safety, he returned swiftly to destroy the bodyguard of Bolg and then Bolg himself. [2]