The Root of the Boot

The Root of the Boot is a poem written by J.R.R. Tolkien, set to the tune of The Fox Went Out, written around 1923. It is first published as the 22nd song in Songs for the Philologists in 1936.

The poem is an earlier version of The Stone Troll, which is published in The Lord of the Rings and The Adventures of Tom Bombadil. This version was reprinted in The Poetry of J.R.R. Tolkien and The Tolkien Papers (1967), The Annotated Hobbit (1988), and in a revised form in The Return of the Shadow (1988). 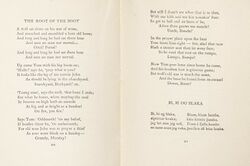 The poem as it appears in Songs for the Philologists

The Root of the Boot

Up came Tom with his big boots on;
'Hallo!' says he, 'pray what is yon?
It looks like the leg of me nuncle John
As should be lying in the churchyard.
Searchyard, Birchyard!' etc.

'Young man', says the troll, 'that bone I stole;
But what be bones, when mayhap the soul
In heaven on high hath an aureole
As big and as bright as a bonfire?
On fire, yon fire.'

Says Tom: 'Oddsteeth! 'tis my belief,
If bonfire there be, 'tis underneath;
For old man John was as proper a thief
As ever wore black on a Sunday —
Grundy, Monday!

But still I doan't see what that is to thee,
With me kith and me kin a-makin' free:
So get to hell and ax leave o' he,
Afore thou gnaws me nuncle!
Uncle, Buncle!'

In the proper place upon the base
Tom boots him right - but, alas! that race
Hath a stonier seat than its stony face;
So he rued that root on the rumpo,
Lumpo, Bumpo!

Now Tom goes lame since home he came,
And his bootless foot is grievous game;
But troll's old seat is much the same,
And the bone he boned from its owner!
Donor, Boner!