(Redirected from Turgon of Gondolin)
Turgon

"But I Turgon will not leave my city, and will burn with it."
― The Book of Lost Tales Part Two, "The Fall of Gondolin"

Turgon was an Elven king of the Noldor, second son of Fingolfin, brother to Fingon, Aredhel and Argon. He was lord of the Elves of Nevrast, and later of the hidden city of Gondolin. 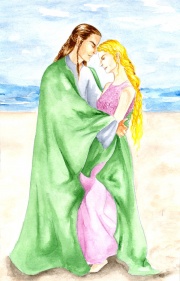 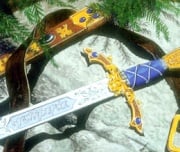 Although Turgon was originally against the departure of the Noldor from Aman, he eventually did set out on the journey. After Fëanor and his sons departed using the only ships, he took his people across the dangerous Helcaraxë with his father Fingolfin. He lost his wife Elenwë in the crossing and settled at Vinyamar in Nevrast.

When he journeyed with his cousin Finrod Felagund along Sirion, Ulmo sent both of them a dream to look for a hidden place where they could be safe from the power of Morgoth. Then in the following year Ulmo appeared directly to Turgon and guided him to the vale of Tumladen in the Encircling Mountains. Initially, Turgon left Tumladen and returned to Vinyamar, keeping his discovery a secret for many years. After the Dagor Aglareb, Turgon began once again to feel the restlessness set in his heart by Ulmo, and his thought turned to Tumladen. He secretly moved many of the most skilled Noldor to the valley, and had them build Gondolin. When it was completed, he abandoned Vinyamar with his people and led them to Tumladen in secret, hidden by the power of Ulmo. Before leaving, however, and following Ulmo's prophecy, he left in Vinyamar a sword, mail and helm for one who would come in the hour of direst need of the Noldor and deliver hope.[2]

In Gondolin, Turgon ruled with the Staff of Doom in his right hand, and a coronet of garnets upon his head. At his side was Glamdring.[3]

Turgon reemerged with his host during the Nirnaeth Arnoediad, and although the battle was still lost, his intervention prevented the rout from completely destroying the armies of the Noldor and their allies. He was killed at Gondolin's fall, when his tower fell down over his head.

However, in The Shibboleth of Fëanor, Tolkien translated Turgon as "Master Shout". There it is explained that the name is the Sindarised version of his Quenya father-name, Turukáno,[6] clearly meaning "Victory Commander".[7]