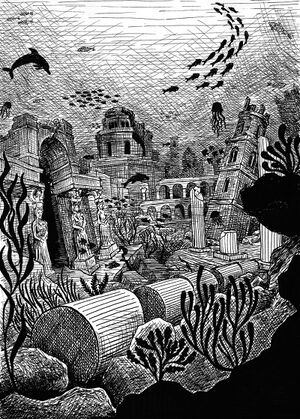 Atlantis-haunting or Atlantic complex refers to J.R.R. Tolkien's recurring dreams of the city of an island being consumed by the ocean.

This legend or myth or dim memory of some ancient history has always troubled me. In sleep I had the dreadful dream of the ineluctable Wave, either coming out of the quiet sea, or coming in towering over the green inlands. It still occurs occasionally, though now exorcized by writing about it. It always ends by surrender, and I awake gasping out of deep water. I used to draw it or write bad poems about it.
—J.R.R. Tolkien, Letter 257

In the 1930's, Tolkien began a challenge with C.S. Lewis which resulted to a "time travel" story, The Lost Road;[1] he completed only four chapters, two of which take place in Atlantis, then known as Númenor. The story takes into account "the traditions of the North Sea concerning the coming of corn and culture heroes, ancestors of kingly lines, in boats"[2] and father-son pairs who share the names of Eädwine and Ælfwine through several versions and cognates.

Around that time, he developed his own retelling of the legend of Atlantis, importing elements from his earlier legendarium notably the villain character of Thû/Sauron from it, who was responsible for its Downfall.

In 1945 Tolkien revisited similar concepts and attempted to write the novel The Notion Club Papers; there, a character named Alwin Arundel Lowdham experiences lucid dreams about Atlantis, which he shares with the Notion Club; through these dreams, he discovers much about the story of Númenor, and that he is a "reincarnation" of Elendil.