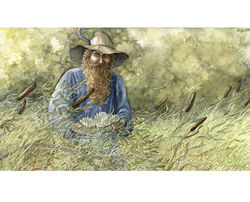 "He is a strange creature."
― Elrond in The Fellowship of the Ring, "The Council of Elrond"

Even during his lifetime, J.R.R. Tolkien was asked directly about Tom, but he dismissed these questions, clearly indicating that Tom is a living enigma, part of a wider, uncomprehensible world:

"... Bombadil is just as he is. Just an odd ‘fact’ of that world. He won't be explained, because as long as you are [...] concentrated on the Ring, he is inexplicable. [A reminder] that the world is so large and manifold that if you take one facet and fix your mind and heart on it, there is always something that does not come in to that story/argument/approach, and seems to belong to a larger story."
― J.R.R. Tolkien[3]

Tolkien suggests that even in the Secondary World, the characters (Hobbits) who interacted with him, were not fully aware of his nature.

When Goldberry was asked by Frodo Baggins who he was, she simply said "He is" which parallels the scriptural name of God in Christianity, "ὁ ὤν" (The Being - the One who is). Goldberry also said that Tom is simply "the Master",[4] and the theory that Tom is an incarnation, embodiment or "avatar" of Eru has been favored by the fans.[5]

However Tolkien later remarked that this dialogue was not a reference to God, the way that priests called "Father" does not allude to God.[6]

It must be added that Tolkien was a devout Roman Catholic, so the idea of an incarnation of the Creator being married may not have been well received by him; he explicitly said that the idea of God's Incarnation was too large to fit in his work.[7][8] (in any case however, Tolkien experimented with this idea in the Athrabeth Finrod ah Andreth about a future incarnation or Eru into the world.)

Tolkien specifically hinted that Tom (unlike Eru) is a part of this world, and he would be destroyed along with everything else, if evil would triumph.[3]

If we reject the Ilúvatar theory, the most common possible explanation is that Tom is an Ainu such as a Vala.[5] Tom seems to have unlimited power inside the boundaries that he set for himself and perhaps the reason of why he has such powers might be the fact that he set himself limits in which he is master.

However since all seven Valar are accounted and known by their names,[9] one has to associate one with Tom. For instance, a theory identifies Tom with Aulë (and Goldberry with Yavanna).[10] Furthermore, it is nowhere referred that Aulë or any other Vala abandoned Valinor to live on Middle-earth and such an explanation becomes risky and radical. The most common theory is, therefore, that Bombadil is just a "rogue" Maia who perhaps stayed behind and did not follow the other Ainur at the Breaking of the World. In contrast to the seven Valar, the Maiar are an unknown number,[9] so it's easy to associate Tom with them.

If Tom refers to the original arrival of Melkor, who was the first Vala to enter Arda, Tom was already there even before all the Valar[11], dismissing the theory that he is a Vala or a Maia. However, it is possible that Tom had been a Maia that was sent to "test" the newly-created world, or ventured there on his own accord before the Valar themselves visited it. Alternatively, Tom might have referred to Morgoth's return to Ea after he had fled from Tulkas. This would still make him mythologically old and not contradict the theory of him being a Maia. Also, if Tom was refering to Sauron as the Dark Lord, then being a Maia would not be as far fetched too.

Tom as a nature sprite[edit]

"The spirit of this earth made aware of itself."
― J.R.R. Tolkien explaining Tom to Nevill Coghill[3]

A more radical and abstract theory is that he is possibly the embodiment of Arda itself, a "Father Nature", or some kind of 'sprite' which (unlike the greater Ainu spirits) were of non-divine nature. Not only does the Ring have no effect on him, Tom himself seems unable to affect the Ring in return which shows that Tom was outside the divine plan and Good vs Evil struggle and had no position in it.[4] Bombadil could have been created as a side-effect of the Music of the Ainur and that would explain why he was there in the beginning.

Another problem with this explanation is that no such beings are mentioned elsewhere in the later legendarium (although one could argue that the sprites and fays, found in such early writings as The Book of Lost Tales, would fit this description).

Tom as the Spirit of the Music of the Ainur[edit]

This theory operates with the understanding that any spirit must be understood to be what they are personally most related to. The argument is that Tom, though close to nature, ultimately separates himself from the Forest by battling against Old Man Willow and by having a different disposition than that of the Old Forest which is described as dark and full of hate for everything that goes about freely. Tom on the other hand, points to song constantly even when fighting the barrow-wight: "None has ever caught him yet, for Tom, he is the Master: His songs are stronger songs, and his feet are faster".[12]

Gandalf, when narrating his fight with Durin's Bane, mentions tunnels made by dark nameless things whose existence Sauron knows not, since they are "older than he".[13]