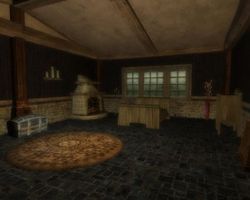 The inside of a house in The Lord of the Rings Online.

After reaching level 15, the player is able to buy a personal or kinship house. There are four homesteads for every race.. Every homestead has its own distinctive architecture and environment based on the racial base of the area. Homesteads are divided in 250 instanced neighborhoods, each with thirty houses (4 kinship houses, 10 deluxe personal houses and 16 standard personal houses). Besides houses, every homestead also has a local gathering area - where players can organise meetings and events -, a Vault-keeper and several vendors. Players can only possess one house per server, which is shared by al the characters. Houses can be visited - if allowed by the owner - by other players aswell. Prices and upkeep vary, depending on the house sort. If the player fails to pay the weekly upkeep, the house is locked for the player untill he pays the rent.

Players can customize and decorate their houses and yard. These decorations can be archieved through crafting, shops and finishing certain quests. Decorations vary from paintings and trophies to furniture and trees. The number of decorations that can be placed in a house depends on the house type: in standard houses contain the least possible number of decorations, whilst kinship houses cost the most. Each house also includes a mailbox. This system has often been compared to The Sims.

A house in the Bree-land Homestead.

Kinship leaders can - as soon as their kinship is three months old and has reached rank 7 - buy a kinship house. Kinship houses function as gathering halls for kinship meetings, events and other social activities. Kinship leader can grant other members the permission to decorate the house and pay a share of the upkeep.

Each house also includes a housing storage, consisting of up to eight chests. The housing storage functions as a shared storage for all the player's characters that have access to the house. Housing storage in kinship houses is open to all the members of the kinship. Players can quickly travel from and to homesteads by nearby stable-masters or swift-travel to their houses from any point in the game by the Travel to Personal House skill.

Mines of Moria and Siege of Mirkwood[edit]

All American servers are hosted by Turbine.

All Russian servers are hosted by IT Territory.

Since 2006, Turbine has periodically released trailers demonstrating various aspects of the gameplay and revealing the characters and locations. All video links are to YouTube, and times are in minutes: