(Redirected from Caves of Narog)

"Thus Finrod came to the Caverns of Narog, and began to establish there deep halls and armouries after the fashion of the mansions of Menegroth; and that stronghold was called Nargothrond."
― Quenta Silmarillion, "Of Beleriand and Its Realms"

Nargothrond was the stronghold built by Finrod Felagund which delved into the banks of the river Narog in Beleriand.

Nargothrond was the capital of the realm of Nargothrond[note 1] between Nenning, Narog and Teiglin, including the surrounding hills of Taur-en-Faroth and the Talath Dirnen to the north, as well as Tumhalad. Finrod was the overlord of all the Elves in the West Beleriand, except the Falathrim.[1][2]

On the western bank of the river Narog, beneath the forested hills of Taur-en-Faroth, the Caverns of Narog were first known as Nulukkizdîn, secretly inhabited by the Petty-dwarves before they were driven out.[3] 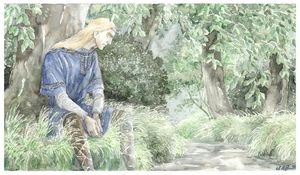 Finrod listens to the counsel of Ulmo by Anke Eißmann

After the return of the Noldor to Middle-earth, Finrod and his brothers were established on north Beleriand with Fingolfin. In F.A. 50,[4] he was visited in Tol Sirion by his cousin Turgon from Nevrast; both travelled together southward to Beleriand. While resting in the Meres of Twilight, Ulmo went to them and laid upon them a deep sleep and disturbing dreams. None told the other about his dreams, but both cousins began a search for hidden places in case Morgoth broke the Siege of Angband.[5]

Years later, Finrod and his sister Galadriel dwelt a time in King Thingol's court. The king told him about the Caverns of Narog, and gave him guides to lead him there. Inspired by Menegroth in Doriath, Finrod chose those caves to build his great underground fortress, and began the construction of Nargothrond.[5]

He was at first aided by the Petty Dwarves that still lingered there, who were greatly compensated, but their chieftain Mîm tried to murder him during his sleep and they were expelled.[6] Thus Finrod was later aided by the Dwarves of the Blue Mountains, who also made for him the Nauglamír, the Necklace of the Dwarves, and gave him his famous epithet, Felagund, Hewer of Caves. Finrod rewarded them with treasures he brought from Tirion.[5] When the building was finished on F.A. 102, a great feast was held there and many attended, including Galadriel.[7] 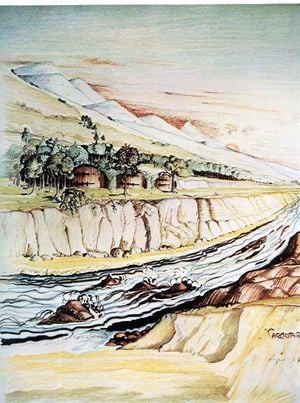 Finrod also raised an artificial hill, Amon Ethir, a league far from the gates of Nargothrond.[8]

Finrod ruled Nargothrond until he joined Beren in his quest for the Silmaril and handed rule to Orodreth. However, since the Dagor Bragollach Celegorm and Curufin, the sons of Fëanor, were defeated and retreated to Nargothrond where they were received as one of them. Although the city grew stronger because of this, the influence of the sons of Feänor became higher. Celegorm and Curufin lived in Nargothrond at the time Finrod departed with Beren and were more powerful than Orodreth until Finrod's death was reported, at which time they were exiled. 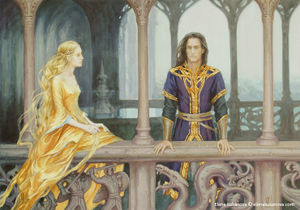 Túrin Turambar later came to Nargothrond and became one of its chief fighters, but he also persuaded the people to fight openly against Morgoth (the bridge was built at this time), which eventually led to its sack by the army of the dragon Glaurung.

Glaurung stayed there for about five more years guarding his stolen hoard until he went northeast to Brethil to assail Túrin and was killed by him at Cabed-en-Aras. Then, Mîm the Petty-dwarf settled there reclaiming his people's ancient home until he was killed by Húrin. Húrin entered the dark caves where the treasures Finrod brought from Valinor still lay there, but he brought out the Nauglamir.[3]

The realm remained deserted for the rest of the First Age until the War of Wrath when it went down with the rest of Beleriand. Ages later, the realm will be remembered in Dwarven lore[9] and mentioned by Galadriel.[10]

From its first conception, the name Nargothrond means "Underground fortress on the river Narog". Its Petty-dwarvish name was Nulukkhizdîn (erronously spelled Nulukkizdîn in the published works).[11]

However, in his later life, Tolkien devised the Dwarvish name Nar(u)kathan instead, to which the Elves suffixed -rond, "vaulted dome".[12]