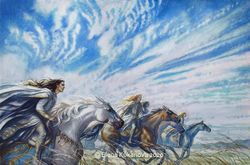 The days of The Long Peace by Elena Kukanova

The Long Peace is a term referring to the extended peace in Beleriand in the First Age during which Morgoth did not try to break the Siege of Angband. It began when Glaurung was defeated[1] in the First Age year 260[2] and ended with the Dagor Bragollach[3] in 455[4] – lasting some 195 years.

During this period the Elven peoples in north west Middle-earth prospered. It was also during the Long Peace that the Edain passed into Beleriand from the east.

The forces of Darkness attempted to break the Siege of Angband. Glaurung the Worm managed to drive the Noldor off Ard-galen, however he was too young, and was pushed back by Fingon. It was then decided that Glaurung should wait to mature until ready to strike back.[1] This long wait allowed for the races of Beleriand to recover and prosper.

The first major event during those years was the arrival of the Edain into Beleriand, looking for the land of the Gods in the West. Finrod quickly befriended these first Men and advised them to settle in Estolad in the realm of Amrod.[5]

Around that time, the Haladin, the Folk of Marach, and the Easterlings crossed over the Blue Mountains into Beleriand. The Haladin dwelt in Thargelion as scattered groups until a host of orcs assaulted their territory in F.A. 375. They built a stockade between the angle of Gelion until Caranthir's army could relieve them. Haleth declined a fief in his lands and moved on to Talath Dirnen to settle in the Forest of Brethil.

In F.A. 402, Orcs attempted to break through the Pass of Aglon, but the people of Bëor helped Maedhros and Maglor threw back the invaders.[6] This was the first time Men fought on behalf of the Eldar. Their head was also given the region of Ladros of Dorthonion.

The Marachians remained in Estolad after the Beorians, becoming close allies with the House of Fingolfin in Hithlum and then moved to the southern slopes of the Ered Wethrin; during the time of Hador in F.A. 416 they were granted permanent fief of Dor-lómin.

The period ended when the Siege was broken in the Dagor Bragollach.[3]