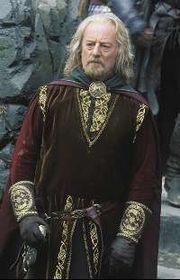 Bernard Hill as Théoden
I'm proud to pay tribute to a great hero of the Lord of the Rings saga, Théoden, son of Thengel, 17th King of Rohan. He was a commander at both of the great battles of the Trilogy, Helm's Deep and Pelennor Fields. He was slain battling the Lord of the Nazgûl on the Pelennor Fields outside Minas Tirith. He was succeeded as King by his nephew, Éomer, who began the third line of Rohan kings.

"That is a fair lord and a great captain of men. If Gondor has such men still in these days of fading, great must have been its glory in the days of its rising."
― Legolas speaking of Prince Imrahil, The Return of the King, The Last Debate*TG Featured Quote

"For, it may well prove that you will see me never again; and that I shall show you no such sign as Eärendil showed long ago. But hold you ever in readiness, for the end of the world we have known is now at hand."
― Amandil speaking to Elendil, The Silmarillion, Akallabêth

The following is out-of-universe, but it applies to an all-war-all-the-time guy like me:

"If you wait by the river long enough, the bodies of your enemies will come floating by."
― Sun-Tzu

This is me, a King among Men
Being a middle-aged African-American man gives me a little different viewpoint on the Tolkien universe. It's certainly Eurocentric, but its also well-designed and highly entertaining. It should be remembered that Tolkien was a product of his times, which thought that the world revolved around Western Europe. So I don't give a lot of credence to this 'Tolkien was racist' nonsense. I am a veteran of a couple of other Wiki sites, like Wikipedia Project: Middle Earth and Memory Alpha. I joined Tolkien Gateway to try to make a major contribution and get involved. I try to raise the level of expertise and professionalism on TG, and I tend to concentrate on articles involving conflicts from the First and Second Ages. It's been my privilege to to re-ignite the Featured Article process here on TG, and to drive the first one through to FA status, Aragorn II. I also nominated and shepherded through the first new Featured Quote in over a year, from Legolas. 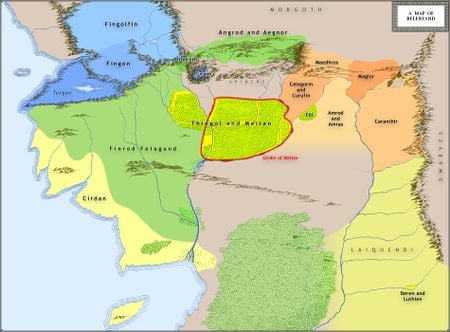 Visit my Nationstates2 Empire, the nation of Techvarinia, part of the Arnorian Imperial Alliance on World 95. I'm the Lord High Chancellor, and KA is my Foreign Secretary. It's a home away from home for Tolkien fans, and it's growing in power. Sorry to say that the game went offline during summer 2009. I'll miss it. I've moved on to other arenas, like Cybernations. KA and I are involved there with an alliance called the Green Old Party-- he's Military Affairs Triumvir, and I'm Director of Defense-- and he's the boss this time.