The Wainrider/Balchoth War was a long series of battles spread over the first, second and third millennia of the Third Age. The first of these attacks occurred several centuries after the founding of Gondor. During this period, Gondor was under assault from the east by a number of Easterling tribes variously referred to as Wainriders and Balchoth. After some serious setbacks for Gondor, they were at last decisively defeated.

Early in the Third Age, c. T.A. 490, Easterling tribes began a series of attacks against the southern Númenórean exile kingdom of Gondor. This first occurred during the reign of King Ostoher, who also rebuilt Minas Anor, in c. 490. His successor, Rómendacil I, defeated an Easterling invasion in T.A. 500, but was slain in a fresh assault by them in T.A. 541. His son, Turambar, once again defeated them and captured a large area eastwards south of the Sea of Rhûn. Gondor was not troubled by Easterling attacks for centuries afterward, and by the reign of Ciryaher Hyarmendacil (c. 1050), Gondor was at the height of its power, controlling wide areas to the south and east.[1]

In T.A. 1851, Rhovanion was invaded by a tribe of Easterlings known as the Wainriders.[2] The soldiers of the Kingdom of Rhovanion, together with the armies of Gondor, met the Wainriders at the Battle of the Plains in 1856, which was a disaster. The King of Gondor, Narmacil II, was killed and Marhwini's father Marhari died leading the rearguard. Much of the Kingdom of Rhovanion was lost and its people were enslaved. Some Northmen escaped, and Marhwini led one band of refugees to the west.[3]

The refugees wandered until they reached the untamed land between the eastern bank of the River Anduin and the western edge of Mirkwood Forest. Settling there in the Vales of Anduin, the refugees would become the Éothéod, the ancestors of the mighty Riders of Rohan.[3] 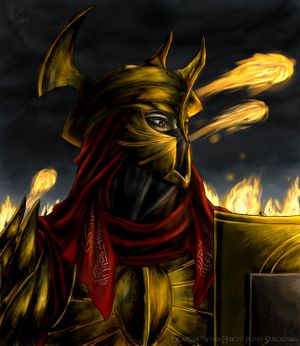 In T.A. 1944, the enemies of Gondor made a double assault: first the Haradrim invaded from the south and then a few days later word came of the Wainriders invading from the east. While Ëarnil moved to deal with the southern incursion the northern army headed north through Ithilien, planning to deploy upon the Dagorlad. Unfortunately, the Wainriders moved faster than expected along the outskirts of the Ered Lithui and struck the head of Gondor's army before any defensive dispositions had been made. Swiftly the enemy's chariots and horsemen overwhelmed the King's Guard, killing both Ondoher and Artamir at the Disaster of the Morannon.

King Ondoher's sister-son, Minohtar attempted to stem the onslaught of the Wainriders. During the rout, the leader of the Éothéod brought to Minohtar the body of Faramir, who had disguised himself in order to fight with a party of the Éothéod. Soon Minohtar himself was slain as the enemy poured into northern Ithilien.

The suddenness of their victory was the Wainriders' undoing. Unbeknownst to them Eärnil had crushed the Haradrim and was racing north to aid the northern army. His attack upon the feasting Wainriders, later known as the Battle of the Camp, defeated the Wainriders and sent them reeling back into the East.[4]

Upon assuming the Stewardship in T.A. 2489, one of Cirion's main concerns was the threat of invasion from the north, where the forts along the Anduin had long been abandoned. He stationed a few men there and sent scouts into the area between Mirkwood and Dagorlad. Cirion's spies discovered new enemies, the Balchoth, steadily migrating in from beyond the Sea of Rhûn.

After the winter of 2509, reports came to Cirion that hosts of men were mustering along the southern edge of Mirkwood with plans to invade Gondor. Desperately, Cirion dispatched several messengers to the Éothéod asking for help. These people had long been friendly to Gondor but had removed to the far north near the sources of the Anduin.

Six volunteer riders were chosen to attempt the nine hundred and fifty-mile journey through Calenardhon, over the Undeeps, and past the shadow of Dol Guldur. Only one, Borondir, got through to Framsburg when he delivered his message to King Eorl the Young.

Knowing that there was scant chance of his message arriving, and not knowing if the Éothéod would respond, Cirion gathered as great a strength as he could and prepared to lead it himself against the threat while leaving his son Hallas in command at Minas Tirith.

However, as Cirion led his forces north, the Balchoth crossed the Anduin on rafts and overpowered the defenders. Cirion's army was cut off and driven north over the Limlight. Then came a sudden attack by a horde of Orcs descending from the Misty Mountains, which pressed Cirion towards the Anduin. Hope was failing when suddenly the horns of Eorl's riders were heard and the fortunes of the Battle of the Field of Celebrant were reversed. Eorl the Young and his riders swept away the enemy, pursuing the Balchoth across the fields of Calenardhon.[3]

Prior to reaching the top, Cirion revealed his resolution, to offer to Eorl the land of Calenardhon for him and his people, in perpetual alliance with Gondor. Eorl accepted, in acknowledgment of Cirion's wisdom and friendship. The group then continued to climb and, at the summit, Cirion revealed the tomb of Elendil. Before witnesses (Cirion’s son Hallas, the Prince of Dol Amroth, and two other Councilors of Gondor), Cirion pledged his bond with Eorl. In return, Eorl swore the Oath of Eorl and became the first King of Rohan.[3]