(Redirected from Riders of Rohan)

"We do not serve the Power of the Black Land far away, but neither are we yet at open war with him; and if you are fleeing from him, then you had best leave this land. There is trouble now on all our borders, and we are threatened; but we desire only to be free, and to live as we have lived, keeping our own, and serving no foreign lord, good or evil. We welcomed guests kindly in the better days, but in these times the unbidden stranger finds us swift and hard."
― Éomer, The Two Towers, "The Riders of Rohan"

The Rohirrim, or the Horse-lords, were a horse people, settling in the land of Rohan, named after them. The name Rohirrim was mostly used by outsiders: the name they had for themselves was Eorlingas, after their king Eorl the Young who had first brought them to Rohan.

The terms Riders of Rohan and Riders of the Mark are commonly used and refer specifically to their mounted soldiers. The King's Riders were specifically the Riders who formed the bodyguard of the King.

"Indeed it is said by our lore-masters that they have from of old this affinity with us that they are come from those same Three Houses of Men as were the Númenoreans in their beginning; not from Hador the Goldenhaired, the Elf-friend, maybe, yet from such of his sons and people as went not over Sea into the West, refusing the call."
― Faramir

In reality, the ancestors of the Rohirrim were the Éothéod, a tribe of the Northmen[1]. Those were Middle Men, related to the Edain of the First Age, who did not go to Beleriand, like the other Edain, who were later rewarded with the island of Númenor by the Valar.[2]

The Gondorians described them as Middle Men, that being inferior to the High Men in both culture and descent, but superior to the Men of Darkness who had worshipped and served Sauron.

According to some more simplified views in Gondor, the Rohirrim were perhaps directly descended from the House of Hador.[3] This belief was accepted by the Rohirrim themselves and strengthened their friendship with Gondor, and it comforted the Númenorean pride of the Gondorians, who surrendered a large part of their kingdom to them.[2][4] As such, The Gondorians believed that the Rohirrim were distantly related to them (having descended from the Atanatári of the First Age).

Long allies of Gondor, the Éothéod were living in the Vales of Anduin, but removed to Calenardhon which was granted them in perpetuity by the Ruling Steward of Gondor, Cirion in reward for the assistance that they offered Gondor at a time of great need, the Battle of the Field of Celebrant.[5]

Later Calenardhon was renamed Rohan (Horse-land) by the Steward Hallas after their many horses. By the Rohirrim themselves, Rohan was usually called The Mark.

The Rohirrim were tall, blond, and mostly had blue eyes. They prized their horses more than anything, and their entire culture was based around these. They had few cities, but lived in many villages on the plains of Rohan.

They are proud and wilful, but they are true-hearted, generous in thought and deed; bold but not cruel; wise but unlearned, writing no books but singing many songs, after the manner of the children of Men before the Dark Years. — The Two Towers

The Rohirrim had had contacts with Elves in their ancient history and knew of Eru, but like the Dúnedain they did not worship him in any temples. They seem to have valued the Vala Oromë the Hunter highly, whom they called Béma.

They measured time with a calendar that came from the Men of the Vales of Anduin and had apparent similarities to the Calendars of the Shire and Bree, and to that of the Dale.[6] These similarities were noted by Meriadoc Brandybuck in his work Reckoning of Years.[7]

They were ruled by a line of kings descended from Eorl the Young, who had first brought them to Rohan, and in times of war, all able men rode to meet the Muster of Rohan. 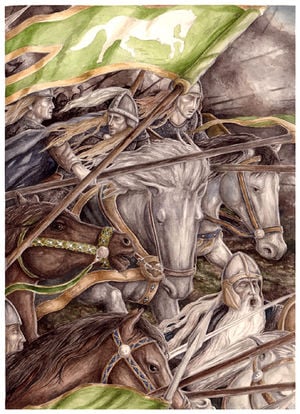 The Ride of the Rohirrim by Peter Xavier Price

The Rohirrim are famous as skilled horsemen, masters and breeders. Among the horses of the Rohirrim are the famed Mearas, the noblest and fastest horses who have ever roamed Arda; Shadowfax was the greatest of all Mearas. There were very few Mearas left in Middle-earth at this point, but there were enough that a breeding population was present. The armies of Rohan are almost exclusively cavalry, divided into irregular units termed éoreds. Rohan's armies were more of a very well trained militia called upon in times of war, with the actual standing army relatively small. The professional career-soldiers of Rohan may have been limited to the royal bodyguard at Edoras.

It was because of this close affiliation with horses, both in war and peace, that they received their now famous name. Rohirrim (or more properly Rochirrim) is Sindarin for "Horse-lords," and Rohan (or Rochand) meant "Land of the Horse-lords." These names were devised by Hallas, son of Cirion the Steward.

During the early days of the War of the Ring, rumours were spread that the Rohirrim supplied Sauron's armies with horses. These rumours were obviously false: the Rohirrim valued their horses more than anything and would never send them away, even as tribute. Still, these rumours had some effect in that they obscured the fact it was Saruman who had fallen, rather than Rohan. The basis of the rumour was that Sauron's Orcs on raids into Rohan stole their horses for use in Mordor's army, but this was outright theft that angered the Rohirrim against Sauron.

The Rohirrim spoke a language descended from that of the Éothéod, related to that of the Northmen of Rhovanion. In comparison to Westron, it was mostly archaic and was not easily understood by the speakers of Westron.

The lords of the Rohirrim used Westron freely, in the gracious, noble and antique manner of the Gondorians.[8]

The Rohirrim wrote with a Mannish version of the cirth, although they did not have a literature, preferring oral tradition.