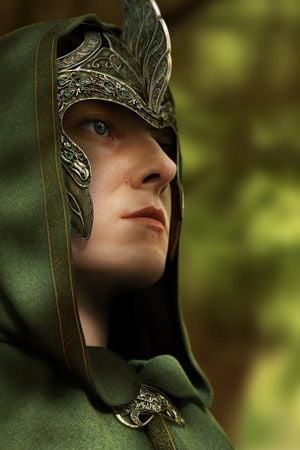 Elves had keener senses than Men. They were slender, graceful yet strong, and were resistant to extremes of nature, illness and disease. However, many Noldor died at the crossings of Helcaraxë.

Almost all of the Vanyar had light-coloured, yellow or deep golden hair. The name Vanyar means "the Fair" in Quenya with the primary sense of "pale" or "light-coloured" and the secondary sense of beautiful. The name was probably given to them by the Noldor and referred to the hair colour of the Vanyar, because the Noldor regarded it as beautiful.[4] Other Elves - including the Noldor, Sindar, and Avari - had dark brown or black hair, as in the cases of Finwë or Maeglin.[5][note 1] Lúthien Tinúviel and her remote descendant Arwen Undómiel, both described as the fairest of all Elves, were dark haired. Additionally, a silver hair colour existed among the Teleri and in the royal houses of the Sindar, with Thingol, Círdan and Celeborn all described as having silver hair.[6]

In some cases elves had atypical hair colour, either due to simple happenstance or intermarriage between clans. A prime example is the royal house of the Noldor and their descendants: Míriel Serindë of the Noldor, the first wife of Finwë and mother of Fëanor, is described as having silvery hair.[7] Fëanor himself possessed "raven-dark" hair,[8] but not all the sons of Fëanor shared this trait; Maedhros and the twins Amrod and Amras had auburn hair (though Amrod's hair grew darker after childhood).[9]:355 This rare red-brown hair colour was a trait of Fëanor's wife Nerdanel and her father Mahtan, who had the epessë Rusco 'fox' due to his hair colour.[9]:353 Finarfin, the youngest son of Finwë, and his descendants had golden hair on account of Finwë's second wife, Indis of the Vanyar. Finarfin's daughter Galadriel displayed an extremely rare hair colour nowhere else observed; golden-silver hair, said to be dazzlingly beautiful ("the light of the Two Trees, Laurelin and Telperion, had been snared in her tresses").[10]

Another Noldo with noteworthy hair colour was Glorfindel, whose hair is described as "shining gold" in colour.[11] Idril, the daughter of Turgon, King of Gondolin, had golden hair inherited from her mother, Elenwë of the Vanyar. Thranduil, father of Legolas and a Sindarin Elf, is described as having "golden" hair in The Hobbit,[12] but Legolas' own hair colour is not recorded. The golden hair colour is sometimes implied among the other Elves: Amroth, a Sindarin Elf of Lothórien is one such case, whose hair is described as "bright" and shining like a spark of gold in the sun.[10] In The Lord of the Rings, a very similar reference is made for an Elf of Lothórien, who had hair that "glinted like gold" in the sun.[13]

When Tolkien describes Elven eyes, they tend to be grey. This is certainly true of Lúthien and her descendants, including Elrond and his children (Arwen, Elladan and Elrohir).[14][15] Voronwë, who guided the man Tuor to Gondolin, also had grey eyes.

Whether Elvish ears were pointed or not is open for speculation,[16][17] but it should be noted that there are no explicit references to pointed Elvish ears in The Hobbit, The Lord of the Rings or The Silmarillion.

In the Etymologies (a linguistic manuscript from ca. 1937-8 published posthumously) is stated that "the Quendian ears were more pointed and leaf-shaped than Human."[18][19] In another linguistic manuscript (from ca. 1959-60), the Elvish connection between ears and leaves is again noted: "Amon Lhaw. ¶SLAS-, ear. las, leaf. slasū > Q hlaru, S lhaw."[20][21]

Answering to a question on Hobbit ears, Tolkien wrote that these were "only slightly pointed and 'elvish'".[22] Some readers take this to mean that Elvish ears were pointed, while others argue that it is an ambiguous statement.[16][17][23]

They detested all evil and were usually more resistant to being corrupted than Men, unless evil tricked them with fair form, like Annatar. Conversely, their work harmed evil, like lembas and the Elven rope that brought pain to Gollum's skin. They were, however, susceptible to greed, pride and jealousy, as exemplified by the story of the House of Fëanor, or the jealous and unjustified hatred of Saeros toward Túrin. [24]

Like Men and Dwarves, Elves did sleep. In The Two Towers, it says of Legolas, "[He] already lay motionless, his fair hands folded upon his breast, his eyes unclosed, blending living night and deep dream, as is the way with Elves."[25]

Also, unlike Men, Elves were ambidextrous.[26]

Although Elves were generally considered the most powerful of the Children of Ilúvatar, there are accounts that some Men from the Great Houses of the First Age were physically stronger, though less agile. It is told that the Dragon Helm was given to Fingon, but "in all Hithlum no head and shoulders were found stout enough to bear the dwarf-helm with ease", so the High King gave it to Hador, a Man.[24]