(Redirected from Necklace of the Dwarves)

The Nauglamír was a golden necklace made for Finrod Felagund by the Dwarves of Nogrod and Belegost, in which were set countless gems that Finrod had brought with him from Valinor.[1] Despite this, the carcanet weighed no more as if it was made of straw. It was Finrod's most prized treasure in Nargothrond and the most famed Dwarven work of the Elder Days.[2]

Húrin finds the Nauglamír, in the ruins of Nargothrond by Pete Amachree

After the Fall of Nargothrond[3], the Nauglamír remained forgotten in the hoard of Glaurung. Húrin Thalion later found it and brought the famed treasure to the Kingdom of Doriath, where he threw it on the floor before Thingol, scornfully thanking the elven king for fostering his son and wife. Queen Melian then spoke to Húrin, seeking to calm his anger, and looking long into her eyes, he at last perceived the truth of how Morgoth had twisted all that he had made him see to further his woe. Then picking up the Nauglamír, he offered it to Thingol:

‘Receive now, lord, the Necklace of the Dwarves, as a gift from one who has nothing, and as a memorial of Húrin of Dor-lómin. For now my fate is fulfilled, and the purpose of Morgoth achieved; but I am his thrall no longer.’
—Quenta Silmarillion, "Of the Ruin of Doriath"

After Húrin left Doriath, Thingol sought to have the treasure remade to bear the Silmaril of Lúthien and Beren in it that he had grown to love fiercely, so that he may wear it day and night, and for this employed the work of Dwarves of Nogrod that had been invited to Menegroth.[2]

The Dwarves were enthralled by the beauty of the Nauglamír and the Silmaril, and desired to possess them for themselves but agreed to the task nonetheless. After they completed their work, they refused to hand the treasure to Thingol, who had come alone into their smithy to receive it, claiming that the Elven king had no right to the Nauglamír, since their fathers had made it for Finrod Felagund alone, and that it was stolen by Húrin from the halls of Nargothrond. But Thingol understood well that they only wished to possess the Silmaril and answered with scorn:

‘How do ye of uncouth race dare to demand aught of me, Elu Thingol, Lord of Beleriand, whose life began by the waters of Cuiviénen years uncounted ere the fathers of the stunted people awoke?’
—Quenta Silmarillion, "Of the Ruin of Doriath"

After this, he called for them to leave Menegroth without payment. But the Dwarves, enraged by his words, slew the king as he stood among them and took the Nauglamír for themselves to carry it off to their homes in the mountains. Yet as they fled eastwards, they were pursued and killed by the avenging Elves, who returned the Nauglamír to Doriath. However, two of Thingol's murderers had managed to slip through the Elves' grasp and returned to Nogrod, where they lied about the cause for the slaying of their kinsmen by the Elves of Doriath, saying that Thingol had ordered them killed to cheat them of their payment. This news roused the Dwarves of Nogrod to war, and they marched against Doriath, which now lay open to its enemies as the Girdle of Melian protected it no longer; for Melian had passed from Middle-Earth soon after Thingol's death and returned to the Undying Lands. As a result, the army of the Dwarves overwhelmed the Elves, and they ransacked Menegroth in the Battle of the Thousand Caves, stealing the entire treasure of Doriath, including the Nauglamír. But they were waylaid by Beren and a host of Green-elves of Ossiriand at Sarn Athrad, who had been informed of what had befallen in Doriath by a messenger. The Dwarves were all slain, and the treasure was cast into the River Ascar, except for the Nauglamír, which Beren bore back to Lúthien at Tol Galen.[2] 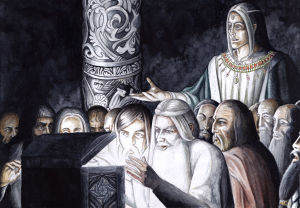 Lúthien wore the Nauglamír for the rest of her life, their combining beauty being the fairest sight east of Valinor. At her second death, a lord of the Green-elves brought it to Doriath to her son, Dior. But when the Sons of Fëanor heard about its whereabouts, compelled by the Oath of Fëanor, they demanded the Silmaril from Dior, who gave no answer; and so the Sons of Fëanor attacked Doriath, resulting in the Second Kinslaying and the death of Dior. But their attempt to reclaim the Silmaril failed, as Dior's daughter Elwing had fled beforehand to the Havens of Sirion, carrying the Nauglamír with her.[2]

The Sons of Fëanor continued their pursuit of the Silmaril and attacked the Mouths of Sirion, leading to the Third Kinslaying, but Elwing cast herself into the sea to escape them, wearing the Nauglamír around her neck. While it is unknown what happened to the Nauglamír itself after this, Elwing and the Silmaril were saved by Ulmo, who brought her in the form of a great white bird to her husband Eärendil aboard his ship, Vingilot, in the middle of the night. Elwing was returned to her human form by morning, and together they sought the undying lands of Aman. Guided by the light of the Silmaril, which Eärendil bound to his brow, they pierced through the Shadowy Seas, and found their way to Valinor.[4]