The Dúnedain of Arnor, also known as the Dúnedain of the North or the Northern Dúnedain, constituted the ruling class and nobility of Arnor being descendants of the Exiles of Númenor who established the North-Kingdom.

"Men of Arnor" was a term used to define the inhabitants of Arnor and its successor kingdoms, both of Númenorean and non-Númenorean descent. The history of the Men of Arnor is extensively dominated by the actions of the Dúnedain of the North.

The Exiles dwelt throughout Eriador, especially along the Lhûn and the Baranduin; but their "chief city was at Annúminas beside Lake Nenuial. At Fornost upon the North Downs also the Númenóreans dwelt, and in Cardolan, and in the hills of Rhudaur; and towers they raised upon Emyn Beraid and upon Amon Sûl".[3]

The Men of Arnor were always less powerful and populous than the Gondorians, despite them having precedence over their southern kin as the seat of the High King.[4]

Originally ruled by their High King, the Dúnedain in Arnor became a separate entity from their southern kin following the death of Isildur, son of Elendil, in T.A. 2.[3][5]

When Valandil, Isildur's youngest son, took up his rule in Annúminas, the Men of Arnor were diminished; there were too few Númenóreans and Men of Eriador to populate and maintain the land developed and built by the Exiles. This is because many Men of Arnor had died in the War of the Last Alliance and at the Disaster of the Gladden Fields.[3]

After the reign of Eärendur, the Dúnedain of the North became divided into the petty realms of Arthedain, Cardolan, and Rhudaur, owing to dissensions among his sons.[3][6]

In c. T.A. 1300, the realm of Angmar, ruled by the Witch-king, was established beyond the Ettenmoors with the purpose of destroying the divided Dúnedain of the North.[6]

During the reign of Argeleb I, the House of Isildur had failed in the other kingdoms and so, the Kings of Arthedain claimed the lordship of all the Northern Dúnedain. This claim was resisted in Rhudaur; there, the Dúnedain were few, and a lord of the Hill-men, whose allegiance secretly lay with Angmar, had seized power.[6] 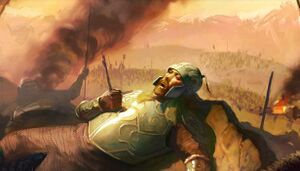 Argeleb I's death. Art from The Battle for Middle-earth II: The Rise of the Witch King

A great host came out of Angmar in T.A. 1409 and entered Cardolan, besieging the Tower of Amon Sûl. The Dúnedain were defeated and Arveleg I, as well as the last prince of Cardolan, were slain. Henceforth, Rhudaur was occupied by evil men allied with Angmar, and the Dúnedain that remained there were killed or fled west. Although Cardolan was destroyed, a remnant of the Dúnedain there held out in the Barrow-downs and others took refuge in the Old Forest.[6]

Although the northern parts of Arthedain were little affected, the Dúnedain were affected by the Great Plague; the joint garrison (of the North and South Kingdoms) at Tharbad ceased to exist,[7] and the last of the Dúnedain of Cardolan died.[6]

In T.A. 1974, the Witch-king, with his army from Angmar, invaded Arthedain and captured Fornost Erain, driving most of the Dúnedain over the Lune.[6] The remnants of the Men of Arnor later joined the great Host of the West which overthrew Angmar.[8]

Main article: Rangers of the North

After the Angmar War, all the people of Arnor were diminished.[6] The Dúnedain of the North were reduced to a few Rangers wandering secretly in the wild, and their heritage was forgotten. It was only in Imladris where they were remembered and it was there that the Heirs of Isildur were harboured.[3][6] 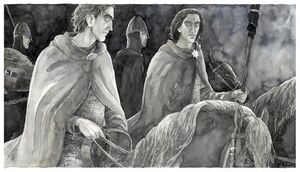 The Lady's gift by Anke Eißmann

Upon the reunification of the Kingdoms of the Dúnedain after the War of the Ring, the Dúnedain were reunited under Aragorn II Elessar, Isildur's Heir, and their glory was restored.[3]

The Dúnedain of Arnor, unlike their kin to the South, were of unmingled Númenórean blood.[1] By the time Hobbits entered Eriador in the mid-Third Age, Men were still numerous: Númenóreans, Men akin to the Edain, and evil Men hostile to the House of Isildur.[10]

In Arnor, the native Men of Eriador accepted the Númenórean kingdom and helped to populate and maintain the places that the Exiles of Númenor initially built. When Elendil led the Men of Arnor to battle against Sauron, the Men of Eriador fought alongside the Dúnedain. After the War, many of these Men perished in battle and their population became diminished.[3]

The Men of Bree, akin to the Dunlendings, also became subjects of the North-kingdom.[11]

The Dúnedain of Arnor were tall, pale-skinned, with dark hair, shining grey eyes, and proud faces. They were taller and darker than the Men of Bree.[2] The Rangers that followed Aragorn were described as being stout and lordly men in comparison to the Rohirrim.[9]

The Dúnedain, including those of Arnor, were lords of long life, great power, and wisdom; far superior to the Men of Middle-earth among whom they dwelt and whom they ruled. They were from the beginning far fewer in number than the lesser men.[11]

In the beginning of their history, the Dúnedain were blessed with a lifespan thrice the life of lesser men, yet this ever-diminished over the course of the Third Age.[6][11] "More swift was the waning in the North-kingdom, for Eriador became colder and there, the Dúnedain became ever less".[12]

In Arnor, the strife and dissensions between the kingdoms of Arthedain, Cardolan, and Rhudaur hastened the waning of the Dúnedain. Although, their lifespans ever-continued to shorten, the Dúnedain, especially the Chieftains of the Dúnedain, maintained significant longevity living to twice the age of lesser men.[6][13] The Heirs of Isildur even lived up to 160 years or more.[14]

Even upon the reunification of the Kingdoms of the Dúnedain, the life-span of all Dúnedain, even those of Arnor, was not restored and continued to wane until it became as that of other men.[15]

The Dúnedain were a martial folk, even considered great warriors in their decline as Théoden noted that the skill of the Grey Company could not be expressed by their numbers.[9]

The Rangers were believed to have strange powers of sight and hearing, and to understand the language of beasts and birds.[2]

The Heirs of Isildur, being men of long life, were "not accustomed to wed until they had laboured long and journeyed in the world".[14] For women, the age of 22 is considered too early, according to the customs of the Dúnedain, to be wed.[16]

Westron was the native language of the people of Arnor.[17] Among the Dúnedain however, including those of Arnor, "the kings and high lords, and indeed all those of Númenórean blood in any degree," for long used Sindarin.[18] Quenya was known to the learned of Arnor, a tradition which has continued from the loremasters of Númenor, to be used for places of fame and reverence in addition to the names of royalty and men of great renown.[11] All the royal names of the Kings of Arnor were Quenya names. The Kings of Arthedain and later the Chieftains of the Dúnedain, however, took Sindarin names.[19]