Bilbo's Farewell Party was a grand celebration held by Bilbo Baggins on his 111st birthday in the Party Field, on September 22, T.A. 3001. It was coincidentally also the 33rd birthday of his nephew Frodo Baggins. Another significance was that Bilbo's and Frodo's years on that day summed up 144 - a gross, and for that reason a portion of the party was "invitation only" with 144 guests.

In T.A. 2989, Bilbo had taken into his custody his orphan younger cousin, Frodo Baggins, with whom he shared a birthday, and they celebrated with lively parties in Bag End. However as years passed Bilbo felt weary (possibly because of his use of his magic ring) and around T.A. 3001 he decided to leave the Shire. He scheduled his disappearance as an abrupt event to occur during his birthday speech.

That year he would celebrate his 111st year and also Frodo's coming-of-age, and announced "a party of special magnificence", which caused a sensation in the vicinity, because of his eccentricity and wealth. Indeed, since previous year he had ordered special gifts from Erebor and Dale, and Dwarves of Erebor started arriving with wagons full of packages; a bigger excitement came when the "conjurer" Gandalf, famous for his fireworks in the Old Took's parties years ago, also arrived.

The following days Bilbo was busy writing and sending invitations, managing his list and packaging the gifts, refusing curious folk who pretended to come for helping. The post-offices of Hobbiton and Bywater were overwhelmed by the number of invitations and responses. His catering from miles around Hobbiton had depleted the stocks of most of the stores, cellars and warehouses.

In the days leading up to the party the large field in front of Bag End was repurposed for the needs of the feast, with ropes, poles, lanterns, tents and pavilions, and a new gate was built to connect it to the road.[1]

It was a huge and expensive celebration attended by most hobbits in the area. Bilbo welcomed the attendees in person at the new white gate, giving each their presents (some secretly exited by a back way and came in again by the gate to get a second present).

Outside of food and drink there were music, songs and dances. There were copious amounts of food and drink and people were continuously feasting from elevenses. Many children came by parental permission (especially since they were fed a free meal). At lunch and tea the guests sat to eat together. At six-thirty Gandalf began a show with all kinds of fireworks. The last one was designed and made especially to honor Bilbo: the figure of a mountain which spouted a lifelike fire-drake, which roared and whizzed three times over the crowd before flying and exploding above Bywater. That was the signal for the supper/dinner.

After the last meal, Bilbo began giving his inevitable and much-dreaded speech, but the guests were already satisfied and could tolerate anything and cheer with every word. As Bilbo began his speech, talking about his age and thanking them for coming, they thought he had said what was necessary and started playing with the musical crackers and dancing the springle-ring. Bilbo had to take and blow a horn in order to silence them. Then he said they were there for three reasons: to tell them that he is fond of all of them; to celebrate his and Frodo's birthday (reminiscing of his arrival to Esgaroth years ago); and to say farewell as it would be the end.

The moment was notable for Bilbo's abrupt disappearance (he used the Ring for that effect, and Gandalf improvised a flash) at the end of his speech. Bilbo then passed behind the surprised guests, who were mumbling and gossipping and sought comfort in more food, and returned to Bag End. He was joined by Gandalf, who persuaded him to leave the Ring in Frodo's keeping, and Bilbo departed for the east[1] with three Dwarf companions.[2]

As the host's heir, Frodo had the duty to comfort the shocked guests and fare them well. Around midnight carriages came to take the important guests home, and those who were too drunk or heavy, were taken by gardeners on wheelbarrows.

The next day, workers were ordered to clean up the Party Field, the installations, the decoration and the culinary and other forgotten things like bags, gloves and handkerchiefs. The news alarmed everyone and Bag End was flooded by the guests who demanded a logical explanation, and to collect the presents Bilbo left for them.

The guests were so full that the next weeks there were almost no purchases of provisions throughout the district. 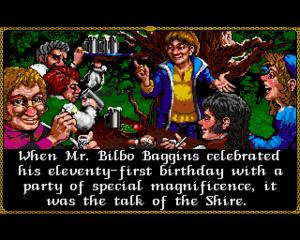 Bilbo's party in the The Lord of the Rings, Vol. I.

Everyone around Hobbiton and Bywater was invited, even from Buckland. Some were distant relatives living in distant parts of the Shire. A few were overlooked by accident, but they came anyway.

A select 144 from the extended families of Bilbo and Frodo (including Gandalf and other special guests) joined the special family dinner-party, held in the great pavilion by the Tree.