(Redirected from Children of Finarfin)

The House of Finarfin was a branch of the Noldorin royal house formed by Finarfin, the third son of King Finwë and his second wife Indis of the Vanyar. Finarfin alone of his siblings inherited the Vanyarin features of his mother, including golden hair, and many of his descendants shared this trait. The descendants of Finarfin were also notable for possessing the blood of all three Elven clans having inherited blood of the Noldor and Vanyar from Finarfin himself and Telerin blood from his wife Eärwen.

During the Exile of the Noldor, Finarfin initially led a host of his people in seeking to leave Valinor. However, Finarfin ultimately repented after hearing the Doom of Mandos and turned back in horror at his brother Fëanor's actions in leading the kinslaying of Eärwen’s people. Thereafter, Finarfin was reckoned the King of the Noldor who remained in Valinor. 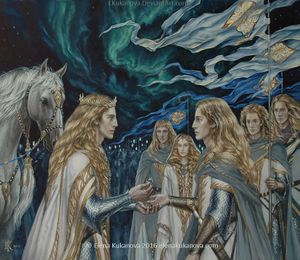 Lord of the Third House in Middle-earth by Elena Kukanova

In Middle-earth, the children of Finarfin, alone amongst the great lords of the Noldor, were permitted to enter the realm of Doriath in light of their kinship with King Elu Thingol through their mother.

During the First Age, Finrod constructed the realm of Nargothrond and reigned as king of that great city. After taking up the kingship of Nargothrond, Finrod appointed his nephew Orodreth as warden of his former seat on Tol Sirion. During this time, Finrod's younger brothers Angrod (father of Orodreth) and Aegnor held the highlands of Dorthonion against Angband. The youngest child of Finarfin, Galadriel - considered the greatest of elven women and greatest of the Noldor except perhaps for Fëanor - dwelt between Doriath and Nargothrond with her brother during the First Age, but eventually wed the Sindarin prince Celeborn. 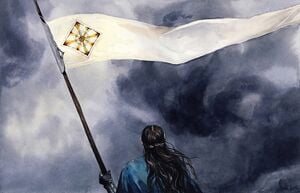 One of the House of Finarfin by Marya Filatova

Angrod and Aegnor were both killed during the Dagor Bragollach and Orodreth was forced out of Tol Sirion by the forces of Morgoth and sought refuge with Finrod. Some years later, Finrod passed on the regency of Nargothrond to Orodoreth in order to fulfil his oath to the House of Beor. After Finrod’s death, Orodreth became King of Nargothrond, but was killed a few short years later during the fall of Nargothrond along with his daughter Finduilas. However, his son Gil-galad survived and became the ward of Cirdan at the Falas. After the death of Turgon during the fall of Gondolin, the High Kingship of the Noldor passed from the House of Fingolfin to Gil-galad of the House of Finarfin as the senior male line descendant of Finwë still living in Middle-earth. During the War of Wrath, King Finarfin led the Noldor as part of the Valar's army against the Dark Lord Morgoth, but returned to Valinor at war’s end.

After Morgoth's overthrow, Gil-galad led his people out of Beleriand and set up a realm in Lindon where he reigned longer than any previous king of the Noldor in Middle-earth. During the Second Age, the House of Finarfin continued through the birth of Galadriel's daughter Celebrian.

After the forging of the Rings of Power, Gil-galad was gifted Vilya and Galadriel was gifted Nenya because they were considered the mightiest of the Eldar and best placed to protect the rings from Sauron. While Gil-galad passed Vilya on to Elrond before his death at the end of the War of the Last Alliance, Galadriel continued to wield Nenya through the Third Age as the ruling Lady of Lothlorien. During this Age, the line of Finarfin continued with the births of Elrohir, Elladan and Arwen to Celebrian. At the same time, the House of Finarfin’s followers appeared be among the wandering companies of Eldar tarrying in Middle-earth given that Gildor Inglorion claimed to be of the House of Finrod.

Finarfin did not come to Middle-earth, but his children were called collectively by the Sindar as "the children of Finarfin", in Sindarin Nost Finarfin ("the house/family of Finarfin").[1]

In earlier versions, Finrod was the name for Finarfin, so in the Noldorin stage it was called Nos Finrod ("House of Finrod").[2]