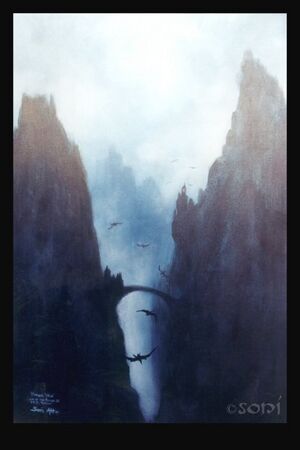 Morgul Vale (Imlad Morgul in Sindarin[1]), was the valley of the Morgulduin in the western Mountains of Shadow. At its outflow into Ithilien stood the fortress of Minas Morgul ("Tower of Dark Sorcery"). The name was only used in the later Third Age, after the Nazgûl captured the fortress of Minas Ithil and turned it into the Tower of Dark Sorcery. The only vegetation in the valley was found along the river: fields of white flowers believed to give off noxious vapors.

Frodo, Sam, and Gollum entered the western end of the valley in order to reach the stairway to Cirith Ungol. As the three passed the white bridge Frodo was dazed by the noxious fumes and began running towards the city, but was stopped by Sam and Gollum. As they climbed the stairs they left the reek behind them on the floor of the valley.[2] Later, when the Army of the West came to and passed the Cross-roads, a vanguard led by Aragorn and Gandalf rode to Morgul Vale and there destroyed the bridge and set fire to the fields.[3] After the war was over, Aragorn as King Elessar ordered that Minas Morgul be utterly destroyed.[4]