"I felt that Tolkien was like an iceberg, something to be reckoned with above water in both its brilliance and mass and yet so much more below the surface."
― Clyde Kilby[1]

Professor Dr. John Ronald Reuel Tolkien CBE (1892 - 1973) is the subject of Tolkien Gateway. His life, his works, his family: everything about the man whom fans have named affectionately the Professor can be found here.

Besides creating Arda, the Little Kingdom, and many other wonderful worlds, Tolkien's reading of Beowulf was groundbreaking, and stands as the interpretation of the epic poem to this day.[2]

Since the Tolkien family's move from Saxony several generations earlier[3], much had changed. The little fortune the family had - they were piano builders - was gone when John Benjamin Tolkien went bankrupt in 1877.[4] His son Arthur worked at a Birmingham office of Lloyds Bank, but there was little chance of promotion.[5] A golden opportunity came when gold and diamonds were discovered in South Africa; bank clerks were in high demand to battle the growing fraud and corruption.[6] Arthur, who had been seeing Mabel Suffield for some time, moved to Bloemfontein. Mabel came several years later, in 1891.[5]

The Lord of the Rings[edit]

The name John was a custom in the Tolkien family. It was usually given to the eldest son of the eldest son. Tolkien's father, Arthur, was the first son of John Benjamin's second marriage; the first son of his first marriage, John, died with only three daughters. As of that moment, the name John went to Arthur's descendants.[7] It passed to Tolkien's first son, John, who became a priest and left no children,[8] so the name John has effectively lost its hereditary signififance.

The name, though Romish in nature, had at first no religious connotations. However, because his birthday (January 3) was the Octave of John the Evangelist, Tolkien chose him as his patron.[7]

Arthur Tolkien's first choice for his eldest son's second child was Benjamin, after his father. Tolkien's mother, Mabel, who was confident she would receive a daughter, chose Rosalind. This would become Ronald when the child turned out to be a boy.[7] Tolkien often used this name as his first name; most of his letters to Edith were signed Ronald, or simply R..[9]

Despite its obvious biblical connotations, the name Reuel does not come from any of the people mentioned in the Bible; instead, it was the surname of a friend of John Benjamin.[7] He gave it to his son Arthur, and both his sons, John and Hilary had it. Even most their male children and grandchildren have it. Though this family friend was never identified, Tolkien recalled the name being of Norman origin.[7] In this light, it might be an early anglification of the surname Rouel, which means "(maker of) small wheels/circular objects".[10] The "biblical" Reuel means "Friend of God".[11]

1992: Tales from the Perilous Realm

Sir Michael Hordern, who had previously played Gandalf in the 1981 radio series of The Lord of the Rings, serves as narrator, who is identified as "Tolkien" in the credits, to all episodes.[12] He provides the narration, paired with the main characters of each segment: Brian Blessed as Farmer Giles,[13] Paul Copley as Smith,[14] Alfred Molina as Niggle,[15] and Nigel Planer and Jonathan Adams as Frodo and Sam.[16] 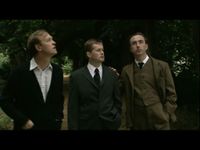 Ian Bellman plays Tolkien in this documentary about convinced atheist Sigmund Freud and influential Christian writer (though not so at first) C.S. Lewis. Tolkien is introduced in a segment recounting Lewis' first experience of faith, a walk at Addison Walk the two had with Hugo Dyson. Tolkien is further shown in group shots of the Inklings, though he does not have any lines.[17]

In this film, also about Lewis, Ben Lambert and Robert Hickson play the younger and older Tolkien.[18]

Two uncredited actors portray Tolkien in this episode; one for the War years (aged 24) and one for the years beyond (aged 36).[19] The latter sports a mustache while the former is clean shaven; an inversion of history. During the war, Tolkien had a mustache, but later images show he shaved it off.

All books and essays written by Tolkien.[20]