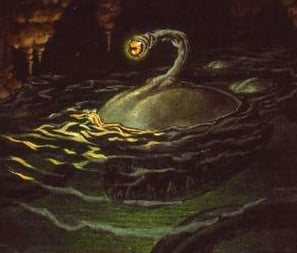 "Far, far below the deepest delving of the Dwarves, the world is gnawed by nameless things. Even Sauron knows them not. They are older than he. Now I have walked there, but I will bring no report to darken the light of day."
― Gandalf[1]

The nameless things were things that were said by Gandalf to dwell so far beneath Arda (specifically the Misty Mountains) that not even the Dwarves had ever chanced to come upon them.[1]

Gandalf claimed that these nameless things under Arda were older than Sauron, suggesting that they were alive before the physical arrival of some Maiar to Arda.[note 1]

These nameless things were said to be "slimier than fish" and preferred to dwell in darkness. They were known to have inhabited the caves deep within the hearts of mountains as far back as the Elder Days. When the Orcs of the Misty Mountains dug around Goblin-town, digging new tunnels and expanding and joining those that already existed, their original owners withdrew to the deepest depths and lurked beyond their knowledge.[2]

According to Gandalf, Durin's Bane had learned to navigate the nameless things' tunnels during its long stay in Moria. After their fall dropped them into an underground lake, the balrog fled through these tunnels and Gandalf pursued it closely, believing that its knowledge of the tunnels was his only hope of escape. Their chase led them to the foot of the Endless Stair, which they climbed to eventually emerge on the peak of Zirakzigil.[1]

Todd Jensen suggests that the nameless things may have been inspired by the dragon Nidhog of Norse mythology, who gnawed at the roots of Yggdrasil the World Tree.[3]

According to Amazon Prime's "X-Ray feature", there were still nameless things in the deepest places of the world, such as the Sundering Seas.

In the second episode, a nameless thing known only as the worm destroyed a ship from the southlands of Middle-earth, leaving the survivors adrift at sea. After two weeks of surviving, the survivors, Halbrand, Eamon, Abigail, and two other castaways picked up a stranded Elf, Galadriel. At that very moment, one of the castaways points out that a ship was approaching, though they realized that it was the wreckage of their own ship being dragged along by the worm. In the ensuing attack, all except for Galadriel and Halbrand are killed by the worm or lost at sea.

Nameless is a creature type categorized as "Ancient Evil". They have a variety of shapes, but most of them are humanoid, only with no eyes or no head at all. They can be found in the Drúadan Forest, having come out of the White Mountains during the Dawnless Day; and beneath the Iron Hills, where a horde of Morgoth's monsters were sealed away by the Dwarves long ago. The largest concentration of Nameless, however, are within the Foundations of Stone, the deepest level of Moria. The Watcher in the Water is also classified as Nameless, as is "Helchgam", another tentacled creature, found in the sewers of Carn Dûm.