"Although they were Moriquendi, under the lordship of Thingol and the teaching of Melian they became the fairest and the most wise and skilful of all the Elves of Middle-earth."
― Quenta Silmarillion, "Of the Sindar"

The Teleri were the largest of the three hosts of the Eldar. For this reason, they had two leaders during the Great March from Cuiviénen, the brothers Elwë (later known as Elu Thingol in the Sindarin tongue) and Olwë. The two lords also had a lesser brother, Elmo. When the Teleri reached Beleriand, Elwë went wandering in the forests as was his wont. In the forest of Nan Elmoth he encountered Melian, one of the Maiar. They fell in love, and the two stood spellbound in Nan Elmoth for several years.[1]

In the meantime, Olwë and many of the Teleri could not delay longer, and departed for Aman without Elwë and his following, who preferred to stay in Beleriand to search for their king. They later became known as the Eglath (the "Forsaken"). During this time, they may have been ruled by the youngest brother Elmo, who was among their number. At long last Elwë awoke from the spell and returned to his people, founding a kingdom in the midst of Beleriand: Eglador ("Land of the Forsaken" or "Land of the Elves"). The Dwarves of Nogrod and Belegost in the Blue Mountains were contracted to aid in the building of the city of Menegroth. 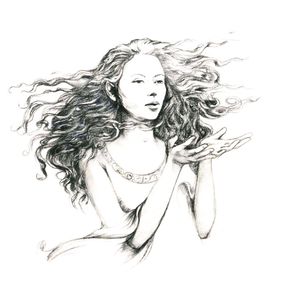 A Sindarin lady by Tuuliky

Other than the Eglath and the Iathrim, other Teleri also stayed in Beleriand and were counted among the Sindar: these were the friends of Ossë the Maia, who had fallen in love with the shores of Middle-earth, and did not wish to depart. Their leader was Círdan, and they established cities at Eglarest and Brithombar. They were known as the Falathrim, or "Elves of the Falas".[3] They were not part of the realm of Eglador, but still took Thingol as their High King.[4]

Yet other stray bands of Sindar settled in Hithlum and in Nevrast[5] to the north of Eglador, although these did not form any realms. Those were the Elves of Mithrim. In addition Sindar from Nevrast later moved with Turgon to Gondolin.[6][7]

In the early Second Age, after the War of Wrath, many of the Eldar who had no desire to leave Middle-earth retreated to Lindon. The Sindar mainly concentrated mostly to Harlindon, under the leadership of Celeborn. Some of them who had no desire to be merged with the other Sindar dominated by the Noldor, left Lindon. Some Sindar (along with Noldor and Green-elves) followed Celeborn and Galadriel to Eriador and for some time dwelt in the lands around Nenuial.[8]

Other came to the forest realm east of Misty Mountains[9]. They became the rulers of the Silvan Elves living there and established the Woodland Realms of Greenwood the Great (S "Eryn Galen") and Lórinand (or Laurelindórenan). The Silvan Elves shared common heritage with the Sindar as both the Silvan Elves (originally known as the Nandor) and the Sindar were of the Teleri clan. Sindar soon merged with the Silvan Elves and embraced and adopted their culture, wishing to experience a more "rustic" and "natural" way of life as was the case after their awakening in Cuiviénen.[9]

Other Sindar had founded the haven of Edhellond in the south, and they were also joined by Silvan Elves who migrated there.[10]

The language of the Sindar evolved from common Telerin over the long ages they were sundered from their kin. Among themselves, their own language had no name, as it was the only one that they ever heard, and didn't need any [11] but in Quenya, the language was designated as Sindarin. During the First Age there were several dialects that fell under the umbrella of Sindarin: Doriathrin, Mithrimin and Falathrin. By the time the Noldor arrived in Beleriand, the languages between the two continents had become mutually unintelligible, but the Noldor were quick to learn it. Sindarin eventually replaced Quenya as the language used by the Noldor in Beleriand, even in predominantly Noldorin settlements such as Gondolin, although Quenya survived as a language of knowledge.

When the Sindar came to the East to rule over the Silvan Elves, their language was adopted by them who spoke a language of Nandorin origin. Sindarin soon influenced by Silvan language and this new dialect became known as Silvan Elvish (or "woodland tongue"). Names such as Lothlórien, Caras Galadhon, Amroth, Nimrodel are possibly of Silvan origin, adapted to Sindarin.[12]

The term Sindar is a Quenya name. It means "Grey-elves" or "the Grey".[13][14] It was devised by the Noldorin exiles, derived from PQ thindi. A less common Quenya name for this people was Sindeldi (sing. Sindel).[14]

Why the Sindar had been called the "grey" yielded a discussion among the loremasters. One theory suggested that it referred to Elu Thingol's, and those near akin to him, hair of silver hue (although most Sindar were dark-haired). Another theory suggested that the name was derived from the meaning of Thingol (Q. Sindikollo), "Grey-cloak" (the Northern Sindar were also said to have been clad much in grey).[14]

In the lore of the Dúnedain the Sindar (and sometimes the Silvan Elves[15]) were also called Middle Elves, distinguishing them from the High Elves (being of their kin) and the Dark Elves, although the latter term included the Sindar sometimes, because of their ignorance of the Light of Valinor.[16]