Return of the Noldor 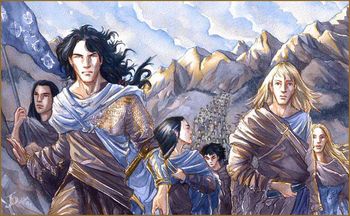 Jenny Dolfen - The Coming of Fingolfin

In the darkness before the Sun and Moon, the Elves who dwelt under the starlit skies of Beleriand suffered a great calamity: Melkor, who had been taken as prisoner into the West thousands of years before, returned suddenly to the northern lands, and settled again in his fortress of Angband. After his return, Orcs stalked the lands of Middle-earth, and though Doriath was protected by the power of its Queen, there was war elsewhere in Beleriand.

In that time, without warning, Fëanor and the Noldor returned out of the West and fought a great battle, called the Dagor-nuin-Giliath ('Battle Under Stars') in which the creatures of Morgoth were utterly defeated. Soon after, Fingolfin and his followers, also of the Noldor, crossed into Middle-earth, and their arrival was heralded by the first rising of the Moon, followed soon afterward by the appearance of the Sun.

To the Elves dwelling in Beleriand at the time, the coming of these princes must have seemed little short of miraculous, and indeed they were generally held to be emissaries of the Valar, sent to aid the Sindar and their allies against Morgoth's power. It was afterwards discovered that this was not the truth: far from being messengers out of Valinor, they were exiles, cursed by Mandos, many with the blood of their kin on their hands. Fëanor had led them back to Middle-earth in pursuit of Morgoth and the Silmarils he had stolen, and their wars with the Dark Lord would destroy all the kingdoms of Beleriand and even, in the end, the land itself.