"And last of all the mounting wave... took to its bosom Tar-Míriel the Queen, fairer than silver or ivory or pearls."
― Akallabêth

Tar-Míriel was the only child of the late-marrying Tar-Palantir, the twenty-fourth King of Númenor.[1]

By the Law of Succession, established by Tar-Aldarion, she should have become the fourth Ruling Queen of Númenor. However, after her father's death, Míriel's cousin Pharazôn took her unwillingly as his wife and seized the Sceptre of Númenor for himself, taking the title of Ar-Pharazôn the Golden. He changed Míriel's name to Ar-Zimraphel. 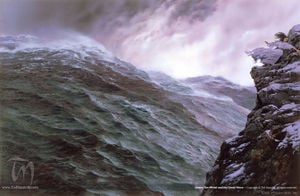 Ar-Pharazôn in his pride brought a mighty fleet to Middle-earth to challenge Sauron for dominion of the land. Sauron pretended to humble himself before the King and was taken as captive to Númenor. Soon Sauron had fully corrupted the King and had persuaded the aging king to seek immortality and assail Valinor itself. The Valar called upon the One, who cast Númenor into the sea. It is said that Tar-Míriel strove to reach the sacred peak of the Meneltarma before the inundation of the island, but the great wave swept her away from the steep side of the Holy Mountain.[2]

Míriel, a Quenya name, had an approximate meaning of "Jewel-daughter". The Adûnaic name Ar-Pharazôn gave her, Ar-Zimraphel is presumably a translation of this. Zimra- means, disputably, 'jewel', while -phel is possibly 'daughter'.

In the first ever writings about Númenor, the last queen of Númenor, who witnessed the coming of Thû/Sauron, was "Queen Istar", wife of "King Angor".[3] In a rewrite, their names are changed to "Tar-kalion" and "Tar-ilien". Unlike in the later Akallabêth, both Tar-ilien and her husband believe Sauron's lies.[4]

In one version of the Akallabêth, Míriel was named Zimrahil and was betrothed to Elentir, the brother of Amandil (the last Lord of Andúnië). However, she fell desperately in love with Pharazôn and chose to marry him when he took up the Sceptre. This story is very different than the tale in the published The Silmarillion, where Ar-Pharazôn takes Míriel very much against her will in order to claim the Sceptre.[5] 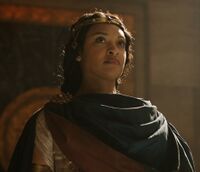 Queen Regent Míriel in The Lord of the Rings: The Rings of Power

Queen Regent Míriel is portrayed by Cynthia Addai-Robinson in the Amazon TV series.[6] She first appears on the series in it's third episode, where she meets Galadriel. In the second to last episode, she becomes physically blind, but she refuses to be patronized in the final episode, threatening to put Elendil in his place to shame should he attempt to do so.