There stood a tower of marvellous shape. It was fashioned by the builders of old, who smoothed the Ring of Isengard, and yet it seemed a thing not made by the craft of Men, but riven from the bones of the earth in the ancient torment of the hills.
—The Two Towers, "The Road to Isengard" 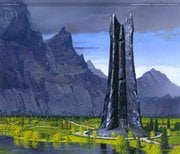 Orthanc in the Second Age by Ted Nasmith

Saruman began to desire the ring for himself and hoped that it might reveal itself by giving Sauron time to re-gain his strength. As head of the White Council, Saruman overruled Gandalf's call for an attack on Dol Guldur in T.A. 2851. However, in T.A. 2941, after Saruman discovered that the servants of Sauron were searching for the One Ring near Gladden Fields, he agreed to attack Sauron's fortress in Mirkwood. After the last meeting of the White Council in T.A. 2953, Saruman withdrew to Isengard and fortified it. It was in circa T.A. 3000 that Saruman used the Orthanc-stone for the first time. Thus it was that Sauron corrupted Saruman's mind and bent it to his will.[9]

Gandalf the Grey caught like a fly in a spider's treacherous web!
—Gandalf in The Fellowship of the Ring, "The Council of Elrond"

In T.A. 3018, Gandalf rode to the foot of Orthanc and there met Saruman. It was then that Saruman revealed his true thoughts to Gandalf. He declared his desire to become a ruler of Men and to join with Sauron. But, most importantly, he announced his desire for The One Ring. Gandalf refused to submit to Sauron and Saruman. Subsequently, Saruman had Gandalf taken to the pinnacle of Orthanc where, Saruman schemed, Gandalf would stay until he revealed the location of the One Ring or until Sauron reclaimed it for himself. There Gandalf was trapped and for the first time he saw wolves and orcs in the valley of Isengard below. After many weeks of imprisonment,[note 1] Gandalf escaped as Gwaihir the Great Eagle came unlooked-for to Orthanc and bore him away.[10]

On 2 March, T.A. 3019, the Ents of Fangorn Forest began their attack on Isengard. By the next day, the Ents have completely subdued Isengard.[11] 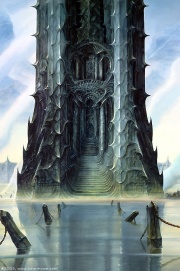 However, their attacks on Orthanc proved futile because the rock of the tower was too hard for the Ents to damage. Therein Saruman remained.[12] On 5 March, Théoden, Éomer, Gandalf, Aragorn, Legolas, and Gimli approached the foot of Orthanc and climbed its stair until they reached the door. There they parleyed with Saruman, who remained inside the tower and spoke to them from a balcony above the door. Saruman refused to co-operate and subsequently Gandalf cast him from the order of Wizards and the White Council, and broke Saruman's staff. After this confrontation, Gríma Wormtongue, who was also inside Orthanc, threw the palantír of Orthanc at the party outside as a parting shot.[13]}}