(Redirected from Northmen of Rhovanion)

The Northmen were Men that lived in the north of Rhovanion in Middle-earth, and were friendly to Gondor.

Counted as Middle Men, they were, after the Dúnedain, the most noble Men on Arda, and believed to have been descended from the same group of Men as the Edain, the Atanatári. The only difference was that they didn't cross the Ered Luin into Beleriand and therefore didn't go to Númenor. The result of them not participating in the War against Morgoth was their considerably shorter lifespan if compared to the lifespan of the Dúnedain, whose lifespan was enhanced by the Valar after the War of Wrath.

The Northmen were a confederation of powerful peoples, who were numerous and dwelt in the plains of Rhovanion, namely between Greenwood the Great and Celduin; their homes were in the eaves of the Great Forest, having deforested the region of the East Bight.[1] The Men of Dale and Lake-town were also counted under the Northmen, as were the Woodmen of Mirkwood. Most of Rhovanion had been depopulated after the wars of the Easterlings and the Great Plague.

The Northmen descended from the group of the Edain who left their kin to reach the West, being always at war with the Men of Darkness.[2] The "Bëorians" were on the vanguard and the "Hadorians" followed on their trail. The latter were divided while passing through Greenwood: some reached the Vales of Anduin and turned northwards, while others passed between the northernmost eaves of the Wood and the Ered Mithrin. Only a few of them reached Eriador and then Beleriand.[3] As such, the Northmen appear to be akin to the House of Hador who stayed behind in Rhovanion.[4][3]

During these migrations many Men wandered or settled the empty lands between the Iron Hills, the Greenwood and the Inland Sea.[5] Those Men of Rhovanion settled near the lands of the Longbeards. The Men looked at the Dwarves with awe (although it is said that they had met evil ones in the east)[6] and were eager to learn from them.

By the end of the First Age the Men who settled between the Grey Mountains and Greenwood were numerous (compared to the Dwarves) but scattered across villages.

After the War of Wrath, former Orcs of Morgoth, now leaderless and reckless, but still numerous, armed and cruel, turned to the East and started harassing the lands. Those Men who settled in small towns could defend themselves only with bows, fences and dikes. In the battles that followed Dwarves and Men were threatened. The Dwarves, outnumbered, were glad to make alliance with Men. Men chiefly provided food in exchange for Dwarven work in building, road-construction, mining, and the crafting of tools and weapons.[7] At first, this system benefited the Dwarves, as the services they provided to Men required less effort than those offered in exchange, till Men became wiser and developed skills of their own.[3]

With better weapons and protection, and riding skills of their own, Men could watch and defend the plains and vales where no Orc could then venture without danger. Thus the Alliance of Dwarves and Men was formed, resulting to mutual respect and also warm friendship.[3] During this period the Longbeards adopted the speech of Men, keeping their own language to themselves.[8][3]

The Alliance ended in the Dark Years when Sauron sent Orcs to invade the peoples, and the Dwarves closed themselves in their mansions. The Northmen also had war with the savage tribes of Easterlings which scattered them and diminished their numbers. Those who remained there were impoverished, living in caves or in the borders of Greenwood.[3] Rhovanion fell under the dominion of Sauron before being liberated by Gil-galad.

The Kings of Gondor recognised the common ancestry with the Men of Rhovanion and showed them great favour. For a time many of them even became subjects of Gondor, as the realm extended beyond the river Anduin. In c T.A. 1000, they were given wide lands south of Greenwood the Great to serve as a buffer against the Easterlings.[9] They increased greatly during Gondor's golden age,[10] and east of Greenwood the Great was the "kingdom of Rhovanion". 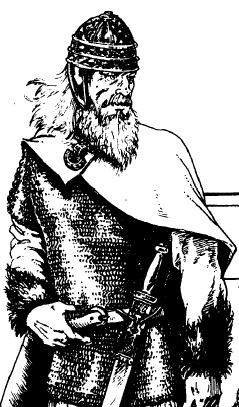 However some Northmen were hostile to Gondor and often assailed the kingdom[10][11] : some Northmen joined the Easterlings who resumed their attacks, either because of feuds, or because of greed for spoil, as Regent Minalcar found out. In the thirteenth century of the Third Age, Minalcar ensured their loyalty by crushing the Easterlings in T.A. 1248 with the help of Prince Vidugavia; he then took many Northmen as officers in the army of Gondor (although the high men of Gondor looked askance at them).[9][10] He sent his son Valacar as an ambassador to Vidugavia, the so-called "King of Rhovanion". Valacar married the daughter of the King, Vidumavi, and their son, Vinitharya (in his mother tongue) succeeded him as King Eldacar. His mixed ancestry caused a civil war in Gondor, the Kin-strife in T.A. 1447.

Their existence was a bulwark of Gondor, keeping its northern and eastern frontiers from invasion. They were weakened by the Great Plague, which appeared in the winter of T.A. 1635 and soon spread to Gondor. The Horsemen suffered because it came with a cold winter and they had only low wooden houses and thronged stables, being little skilled in the arts of healing and medicine. The Plague resulted in the deaths of half of Rhovanion, and of their horses also. They were slow to recover, but they were undisturbed, since the hostile Easterlings had been equally afflicted.[4]

When the invasions of the Wainriders began against Gondor, the Northmen suffered the first assaults. Their scattered remains were recruited by King Narmacil II who took a great army north into the plains south of Mirkwood. They were defeated in the Battle of the Plains (T.A. 1856) where Narmacil and Marhari were killed. Most of the Northmen were reduced to servitude, and all their former lands were occupied by the Wainriders. A few managed to flee to Gondor, others over the Celduin and were merged with their kin, the folk of Dale under Erebor and others followed Marhwini to the Vales of Anduin and became the ancestors of the Éothéod.[4]

In T.A. 1899, Marhwini prepared an outbreak against the Wainrider occupation. After helping Calimehtar in fighting them in Dagorlad, desperate poorly-armed outlaws came out of Mirkwood and roused the slaves. They burned many Wainriders' dwellings, storehouses and fortified camps of wagons. Most of them perished in the attempt fighting the Wainriders' youths, women and old men. Marhwini retired to his land beside the Anduin, and the Northmen of his race never again returned to their former homes.[4] Afterwards they battled with the enemies alone since Gondor could not help them. Still they joined the forces of Gondor against Angmar and many comprised the army of the Battle of Fornost (T.A. 1975).[12] 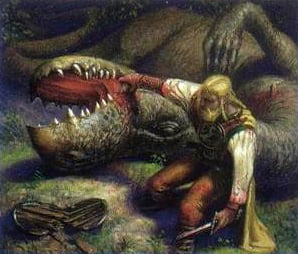 After the evil Kingdom of Angmar was defeated by Gondor and the remains of Arnor in T.A. 1977, these Northmen moved north and began to call themselves the Éothéod. They were skilled horse-breeders and horsemen. In T.A. 2510 they responded to a plea of help from the trapped Gondorian army at the Field of Celebrant. After they helped Gondor win this important victory they were rewarded the province of Calenardhon which became known as Rohan.

By the late Third Age, the Northmen were spread throughout the lands east of the Misty Mountains but had largely ceased to be a united people, as the Kingdom of Rhovanion was no more. Men who were of Northmen descent included the Rohirrim, the Men of Dale (later known as the Bardings), the Lake-men, the Beornings, and the Woodmen of Mirkwood.

In later centuries it is mentioned that the Northmen of Dale and Esgaroth were allied with Erebor and with Dwarven weapons drove their enemies back to Rhûn. However they did not prevent the enemies from reaching the gates of Erebor during the War of the Ring.[9]

Since the Northmen were mostly descended from the Edain, their languages were related to Adûnaic and some languages still bore a great resemblance to Westron. This language family included the languages of the peoples of the upper Vales of Anduin (the Beornings and the Woodmen of Western Mirkwood), the Lake-men, and the Men of Dale. The Rohirrim still spoke their ancestral tongue, giving new names in it to nearly all the places in Rohan. The Kings of Rohan used the Common Speech and spoke it nobly like the Gondorians; a more gracious and antique style of the language.[13] The Kings and their descendants after Thengel also knew the Sindarin tongue - the language of the nobles of Gondor.[14]

Tolkien was possibly inspired by the ancient Northmen of northern Europe (These "Northmen" appear in his poem "The Homecoming of Beorhtnoth Beorhthelm's Son".[15]) and their language is rendered with Old Norse. A significant difference is that the real Northmen were mostly sea-faring peoples while the Northmen of Rhovanion were continental.