(Redirected from The Hobbit films)

An Unexpected Journey, The Desolation of Smaug, and The Battle of the Five Armies, known collectively as The Hobbit, are three live-action films based upon J.R.R. Tolkien's 1937 novel of the same name, although elements from The Lord of the Rings books are also used.[1][4]All three films were directed by Peter Jackson and they were conceived as prequels to Jackson's earlier project, The Lord of the Rings (film series).[3][6]

Martin Freeman plays the films' title role of Bilbo Baggins.[3] Thorin Oakenshield is portrayed by Richard Armitage,[3] and Benedict Cumberbatch plays the dragon Smaug.[7] Several cast members from The Lord of the Rings (film series) reprise their roles, including Ian McKellen as Gandalf the Grey, Cate Blanchett as Galadriel, Andy Serkis as Gollum, Hugo Weaving as Elrond, Christopher Lee as Saruman, Orlando Bloom as Legolas and Elijah Wood as Frodo.[3]

Peter Jackson initially planned to produce two films, but following the conclusion of principal photography, and on seeing early cuts of these films, he decided that he wanted 'to tell more of the tale'. Therefore on 30 July, 2012, Jackson announced that 'two films will become three'.[6][10]

The three Hobbit films follow the plot from J.R.R. Tolkien's The Hobbit in addition to added details revealed in the Appendices to The Lord of the Rings.

For more specific information see the plot section for each respective film:

If I were to make these films, I would be frustrated because I would be constantly thinking about what I had done on The Lord of the Rings. I would somehow feel that I had to build or improve on that. I thought it would be a fairly unsatisfying experience to have to compete against my own movies.
—Peter Jackson[11]

The apathy of Peter Jackson was the first obstacle to block the way to a Hobbit film (or films). In early 2005 it came to public attention that Jackson was suing New Line Cinema.[12] This cast doubt on whether or not The Hobbit would ever be made. Jackson later told fans that, due to the dispute, he would neither direct nor produce the film.[12] In late 2007 it was confirmed that Jackson would not direct, but would be an executive producer for two Hobbit movies.[13] It was later announced that Guillermo del Toro would direct the films, and that Jackson will be an active 'executive producer' with the possibility that he would help direct some scenes if necessary.[14]

However, on 30 May 2010 it was revealed that del Toro could no longer commit himself to direct The Hobbit films, citing the continued delays in production in his reasoning.[15]On 15 October of the same year it was announced that Peter Jackson would direct both films.[16]

The estate has [...] asked for a court order giving them the ability to terminate any rights the studio have to make films based on other Tolkien works, including The Hobbit.
—BBC News Online[17]

Production of The Hobbit films was held up by the Tolkien Estate's legal action against New Line Cinema. The Estate should have received 7.5 per cent of all profits from the films under the agreement made by J.R.R. Tolkien with United Artists in 1969. Crucially, they also sought to stop the production of The Hobbit films until the case was settled.[17] The legal row was finally settled in September 2009 after the Tolkien Estate successfully sued New Line Cinema for breach of contract and fraud, receiving a reported $220 million in compensation.[18]

Even before the issue of the directorship had been settled, and before the project was given the go-ahead by the studios, the International Federation of Actors (IFA) told actors to actively avoid participation in the production of The Hobbit films.[19] The IFA issued this "Do Not Work Order", on 24 September, 2010, on the basis that the studios refused to engage in union-negotiated contracts.[20] Meanwhile the studios argued that they could not make an agreement with a trade union under New Zealand law.[19]

Peter Jackson subsequently warned that the dispute could lead to a huge delay and that production could easily transfer to Eastern Europe.[21] John Key, the incumbent Prime Minister of New Zealand, weighed in on the dispute saying that he hoped the dispute would not force The Hobbit production to move overseas. He also announced that the New Zealand government had gotten involved in the discussions.[22]

Whilst the studios announced that filming would begin the following February,[23] the dispute remained unsettled. With the studios seriously considering moving the production abroad, large numbers of New Zealanders protested in Auckland, Wellington, and Christchurch.[24] A settlement was finally reached on 27 October, 2010, with the Prime Minister himself announcing the news, hoping to prevent the loss of jobs in New Zealand and to reinforce the country's Tolkien tourism industry.[25] As part of the agreement, the New Zealand government passed legislation which clarified that film industry workers are independent contractors rather than employees.[26] Filming finally began on 21 March, 2011.[8]

The original plan was to produce two films, entitled The Hobbit: An Unexpected Journey and The Hobbit: There and Back Again (to be released in 14 December 2012 and 13 December 2013 respectively).[1]

With principal photography coming to a close in July, 2012,[9] Jackson began to discuss the notion of a third film with Fran Walsh and Philippa Boyens.[27]

At San Diego Comic-Con International of 2012, Peter Jackson revealed that he hoped to film more material (based on The Appendices) in 2013; this led to speculation that there could be a third "Hobbit" film. These rumours gained substance following media reports that Jackson was in discussion with Warner Bros. about the notion of an additional film.[28] It later emerged that Walsh and Boyens were sent to Los Angeles to pitch the idea to Warner Bros. whilst Jackson continued to shoot footage.[27]

On 30 July, 2012, Peter Jackson announced that there would indeed be a third "Hobbit" film. After watching the early cuts of the first two films, Jackson, Walsh and Boyens decided that they wanted to tell more of the story.[6]

We know how much of the story of Bilbo Baggins, the Wizard Gandalf, the Dwarves of Erebor, the rise of the Necromancer, and the Battle of Dol Guldur will remain untold if we do not take this chance. The richness of the story of The Hobbit, as well as some of the related material in the appendices of The Lord of the Rings, allows us to tell the full story of the adventures of Bilbo Baggins and the part he played in the sometimes dangerous, but at all times exciting, history of Middle-earth.
—Peter Jackson[6]

On 31 August, 2012, it was revealed that the titles of the second and third films would be The Hobbit: The Desolation of Smaug and The Hobbit: There and Back Again respectively. The release of the first and second film remained unchanged, whilst the third film was due for release on 17 December, 2014 (moved from the initial release date of 18 July, 2014).[4][5]

On 24 April, 2014, Peter Jackson revealed that the final film would be re-titled The Hobbit: The Battle of the Five Armies.[29] 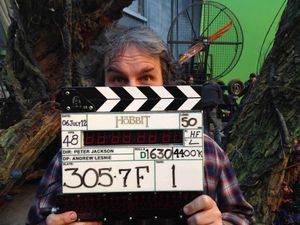 Peter Jackson on the last day of principal photography.

Back-to-back filming for The Hobbit films began 21 March, 2011.[8] All location filming was done at sites across New Zealand, and most on-set filming took place at Stone Street Studio, Wellington.[30] Filming also took place at Pinewood Studios in the United Kingdom in July, 2011. Using their F Stage and N&P Stages, the production filmed scenes with Christopher Lee who could not fly to New Zealand.[31][32]

Although "pick-up" filming had already been planned for 2013, it emerged that extra filming would need to take place to accommodate the expansion of the project from two films into three.[27] 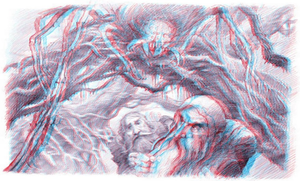 The Hobbit: An Unexpected Journey, The Hobbit: The Desolation of Smaug, and The Hobbit: The Battle of the Five Armies were filmed in 3D using RED Epic cameras. A rig designed by 3ality Technica is being used in the filming of the three films; here two cameras and a mirror are used in order to achieve an intraocular effect similar to that of a human's (the distance between the eyes). This is how the depth required for 3D film is achieved.[33]

Most of John Howe's and Alan Lee's concept art has continued to be produced in 2D. However, they have collaborated on 3D pieces using the simple red and blue 3D effect.[33]

Jackson later discussed the advantages of filming at higher frame rate and in 3D.

Now, in the digital age, there’s no reason whatsoever to stick to 24 fps. [...] Science tells us that the human eye stops seeing individual pictures at about 55 fps. Therefore, shooting at 48 fps gives you much more of an illusion of real life. The reduced motion blur on each frame increases sharpness and gives the movie the look of having been shot in 65mm or IMAX. One of the biggest advantages is the fact that your eye is seeing twice the number of images each second, giving the movie a wonderful immersive quality. It makes the 3D experience much more gentle and hugely reduces eyestrain. Much of what makes 3D viewing uncomfortable for some people is the fact that each eye is processing a lot of strobing, blur and flicker. This all but disappears in HFR 3D.
—Peter Jackson[34]

One of the drawbacks of filming 48 frames per second at 5K resolution is that the make-up, prosthetic, prop, set, and costume departments have to work differently. For example, the make-up and prosthetic departments have to redden up the faces of the actors much more than usual because otherwise their skin colour will turn up yellow on the final film. Furthermore, real hair has to be used in order to achieve an authentic look when it moves around.[33]

Ten minutes of footage was shown at 48 FPS during the Warner Bros. presentation at CinemaCon 2012. The reaction was mixed. The Los Angeles Times described the picture as 'hyper-realistic' and the Associated Press described 'vivid, with grass blades, facial lines and soaring mountains appearing luminous and pronounced. The actors looked almost touchable, as if they were performing live on stage'. However, an anonymous projectionist said that '[i]t looked like a made-for-TV movie'.[35][36]

In late 2011, the Los Angeles Times reported that Warner Bros. Interactive Entertainment would release a video game based on The Hobbit in lieu of the release of The Hobbit: An Unexpected Journey in December 2012.[37] However, this game was never released.

In September 2012, Warner Bros. Interactive Entertainment announced that it would produce two free-to-play video games, in co-operation with Kabam.

Guardians of Middle-earth, a "Multiplayer Online Battle Arena" video game by Monolith Productions, includes some playable characters ("guardians") from The Hobbit films. Additional The Hobbit "guardians" were added after the release of The Hobbit, to tie in with the films.[41]

On 17 December, 2011, it was announced that the Lego Group had received the rights to create Lego sets based on The Lord of the Rings and The Hobbit: An Unexpected Journey. The first sets on The Hobbit were released in the end of 2012.[42] 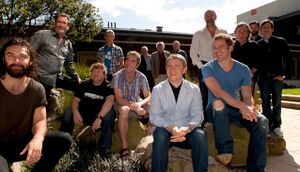 'Bilbo' and the 'thirteen dwarves' (N.B. Rob Kazinsky has since been replaced by Dean O'Gorman to play Fíli).[43]