Maedhros was one of the princes of the Noldor and was eldest of the Sons of Fëanor.

Maedhros was born in Valinor during the Time of the Two Trees. After the banishment of Fëanor from Tirion in Valinor, he went with his father to Formenos in exile.[1] When Morgoth killed Finwë and stole Fëanor's beloved Silmarils, Maedhros and his brothers took the terrible Oath of Fëanor to recover the jewels.[2]

Maedhros went with his father to Alqualondë, where the First Kinslaying broke out, in which he took part. When Fëanor sailed off without the host of Fingolfin, Maedhros thought that he was planning to return and carry across the others. He expected that the first ship would carry Fingon, his friend. When he learned that in fact, Fëanor planned to abandon them to prevent Fingolfin from following, he was angry and, alone of his brothers, refused to help burn the ships.[2] 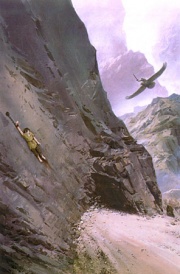 When Fëanor was killed in the Dagor-nuin-Giliath, Maedhros became the High King of the Noldor. However, this position was held briefly, as Morgoth sent an embassy, feigning the surrender of a Silmaril. The Oath driving him, Maedhros also feigned to treat with Morgoth, but instead he was captured by Morgoth's embassy and hung by the wrist of his right hand upon the face of a precipice of Thangorodrim for about thirty years.[source?] In a daring rescue, his cousin Fingon, helped by Thorondor the King of Eagles, saved him from torment, but he was forced to cut off Maedhros' hand to release him from the shackle. In gratitude for this, and in atonement for Fëanor's desertion of Fingon's house, Maedhros relinquished all claim as the heir of Finwë and gave up his position as High King of the Noldor, passing it over to his uncle Fingolfin, Fingon's father, a decision his brothers did not approve of.[3]

Seeing that his brothers were likely to cause feuds with their kinsmen, Maedhros moved them out of Hithlum, and later ruled the lands around the Hill of Himring, which became known as the March of Maedhros. Allied with Fingolfin, he won the battle of Dagor Aglareb, and, thanks to his daring deeds during the Dagor Bragollach, Himring stood while many other elven realms fell.[3]

Hearing word of the deeds of Beren and Lúthien, he took hope and gathered his brothers and united with other Elven Houses to create the Union of Maedhros, an alliance to lay siege to Morgoth's fortress of Angband. However, no support came from Thingol or Nargothrond, due to the deeds of Celegorm and Curufin, Maedhros' brothers. The Union and the siege was utterly broken after the defeat in the Nirnaeth Arnoediad. Himring was garrisoned by Orcs. Maedhros and his brothers lived in Ossiriand, consorting with the Laiquendi.[4]

Maedhros learned that Dior, son of Beren and Lúthien, had inherited the Silmaril that they had recovered from Morgoth. Still driven by the Oath, he was convinced by his brother Celegorm to attack Doriath. Celegorm, Caranthir, and Curufin were slain by Dior Eluchíl, the King of Doriath, who was in turn slain by them. Dior's sons, Eluréd and Elurín, were captured and abandoned by Celegorm's servants in the forest, leading Maedhros to search for the innocent youths, but to no avail. After learning that Elwing, Dior's daughter, had survived, he and his surviving brothers descended with an army upon the remnants of the people of Doriath living in the Havens of Sirion. The Noldorin princes killed many Elves and captured Elwing's sons Elrond and Elros in the sack, but Elwing escaped with the Silmaril, jumping off a cliff and into the ocean.[5]

Maedhros casts himself into a chasm by Ted Nasmith

After the War of Wrath, he and his last surviving brother, Maglor, stole the two remaining Silmarils taken by the Valar from Morgoth. But because of the evil deeds committed by the brothers to regain the jewels, they burned the hands of Maglor and Maedhros. Unable to bear the suffering, Maedhros cast himself and the Silmaril he carried into a fiery chasm in the Earth.[6] It is uncertain whether he was eventually released from Mandos, or whether he still remains there with his father till the End of the World.

Maedhros is Sindarin, a compound of maed ("shapely") + ross ("red-haired"), which are Sindarized elements of his names Maitimo and Russandol (both explained below).[7] Thus this name would be properly spelled Maedros.[8]

In the earlier Noldorin phase of the language, the name Maidhros/Maedhros is said to mean "Pale-glitter". It is formed by the adding up maidh ("pale", "fallow" or "fawn") and "archaic" rhoss ("flash", "glitter of metal").[9]

Maedhros' father-name was Nelyafinwë ("Finwë third"), shorter form Nelyo, as his grandfather and father both shared the name Finwë.[8] Nelya is a Quenya adjective that means "third".

His mother-name was Maitimo ("Well-shaped One"), for he was noted for his bodily comeliness.[8]

His brothers and other kin gave him the epessë Russandol ("Copper-top"), referring to the dark red hair he inherited from his grandfather Mahtan.[8] It is clearly derived from russa ("red-haired"). In relation with this name, it is also notable that Maedhros also wore a copper circlet.[7]